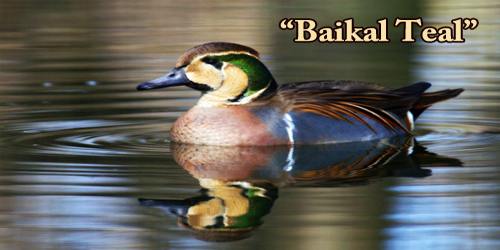 The Baikal teal (Sibirionetta formosa), is a seasonally migratory bird, also known as the bimaculate duck, or squawk duck. The birds fly for breeding in the summer to Siberia, Russia, and migrate for the winter to southern Japan, southeast China, and South Korea. The first formal description of the Baikal teal was issued under the binomial name Anas formosa by the German naturalist Johann Gottlieb Georgi in 1775. A molecular phylogentic study published in 2009 found that the genus Anas as then defined was non-monophyletic. These ducks can be found in Siberia as far north as latitude 70 degrees north, and west as far as longitude 85 degrees east. Often the ducks can be found as far south as Myanmar and northeast India while wintering. According to recent trends, the wintering range can expand in China. Baikal teals are normal ducks. The top of their head is dark brown to black, with buff and green patches on the white and black surrounding skin. Speckled with black, the breast is light brown. The sides are greyish-bluish. The bill is black or dark gray, and the legs and feet are brown. At between 39 and 43 centimeters (15 and 17 in), this duck is slightly larger and longer-tailed than the common teal. The Baikal teal is 11.75 to 15.75 inches high and weighs an average of 1 pound. The drake looks more like the female in non-breeding (eclipse) plumage but the plumage is a much richer reddish-brown (rufous) color. 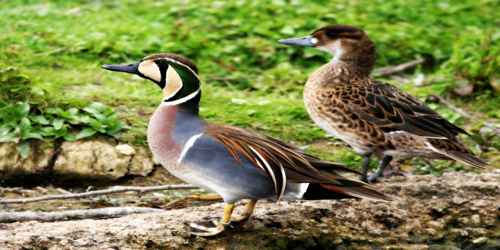 In Siberia, the ducks mate in freshwater ponds and pools in taiga and tundra regions during the summer breeding season. Nests can typically be found in surrounding fields or in bogs between small stands of trees. The birds arrive in Southeast Asia during the winter to feed and encourage adolescents to fully mature in the freshwater rivers and lakes, and sometimes even in brackish water areas. This duck feeds by dabbling from the water surface. Dipping its head, it upends its body. In the woods and grains and seeds, Baikal teals forage for acorns at night. This species feeds on plants with seeds and grains, fish snails, algae, and other foods. This species is listed on the IUCN Red List as Least Concern, although it was listed as Vulnerable before 2011 due to the hunting and degradation of its wintering wetland habitats. These threats remain, but the Baikal teal is recovering, with increased numbers of wintering birds and some increase in habitat area. The males resemble the females in their full brown color during the non-breeding season but can maintain some of the patterns close to their eyes. The juveniles are brown with less contrast than the females and with distinct patterns. Females lay 6-9 pale green eggs. Incubation lasts between 24-25 days, exclusively by females. Dabbling ducks closely related to Baikal teals such as mallards were widely known to hit 25 years of age in the wild when not hunted. Hunting is the only major threat to the ducks which results in a shorter lifespan.