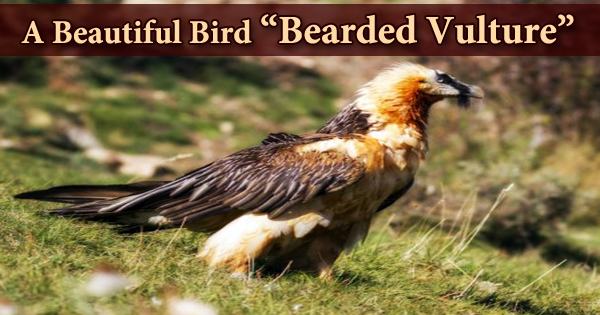 Only the bearded vulture (Gypaetus barbatus), also known as the lammergeier and ossifrage, has specialized in the processing of dead animal bones. Because of its unique diet, the Bearded Vulture varies from other vulture species in several ways. It’s a raptor and the only member of the Gypaetus genus. In Iran and northwestern Asia, this bird is known as the Huma bird or Homa bird. In mountainous areas where wolves and bears hunted, the Bearded Vulture thrived. Falls, avalanches, and predators destroy wild ungulates and domestic livestock in high valleys. They could scavenge for bones and eat what the other vultures couldn’t. When it comes to ingesting food, they have an ace up their sleeves. They are able to sever the biggest bones that cannot be swallowed in their entirety. They do this by throwing the bones onto rocky flat areas and then returning to retrieve the smaller fragments. It is traditionally thought to be an Old-World vulture, but it actually belongs to the Accipitridae family, where it shares a minor lineage with the Egyptian vulture (Neophron percnopterus), its closest living relative. The bearded vulture is the only known vertebrate whose diet is almost entirely composed of bone (70 to 90%). It lives and breeds on crags in high mountains in southern Europe, the Caucasus, Africa, the Indian subcontinent, and Tibet, laying one or two eggs in mid-winter that hatch in early spring. Bearded Vultures often fly long distances in search of food. Bearded Vultures are the largest breeding bird in the Alps, with a wingspan of 2.6 to 2.9 meters and a weight of five to seven kilograms. They prefer environments that are accessible and mountainous. When hunting, they take advantage of the updrafts that occur along the mountain slopes to make finding the remains of dead animals easier. Bearded Vultures frequently fly at low altitudes because they search with their eyes.

The Bearded Vulture has a wingspan of 2.31–2.83 m (7.6–9.3 ft) and measures 94–125 cm (37–49 in) in length. It weighs 4.5–7.8 kg (9.9–17.2 lb), with the nominate race averaging 6.21 kg (13.7 lb) and the African G. b. meridionalis averaging 5.7 kg (13 lb). Females have a small advantage over males in terms of size. Its long, narrow wings, with a wing chord measuring 71.5–91 cm (28.1–35.8 in), and long, wedge-shaped tail, measuring 42.7–52 cm (16.8–20.5 in), make it virtually unmistakable from other vultures or even other birds in flight. The length of the tail exceeds the width of the wing. Bearded Vultures reach sexual maturity between the ages of 5 and 7. Breeding typically happens between the ages of 8 and 9, and only once every second or third year. During a breeding season, a breeding pair may only have one young bird. The bearded vulture, unlike other vultures, does not have a bald head. While this species has a small head, it has a strong and thick neck. It has an elongated, slender form that can look bulkier due to the birds’ often hunched backs. The feet are broad and strong, and the gait on the ground is waddling. As a result, the Bearded Vulture will live to be very mature. Bearded Vultures in zoos are usually 40 to 50 years old, although in the wild, bearded vultures over 30 years old are not rare. Human-caused hazards will easily increase mortality, posing a significant threat to the Bearded Vulture’s survival. These birds can only live in the long run in a well-protected climate. The adult’s color is mostly dark gray, rusty, and whitish. Above, the sky is grey-blue to grey-black. The plumage on the head, breast, and leg feathers of bearded vultures varies from orange to rust, but this is purely cosmetic. This coloration may be the result of dust bathing, rubbing mud on its body, or consuming mineral-rich water. Despite the fact that the Bearded Vulture can only raise one chick per year, they normally lay two eggs. Since the two eggs are laid at different times and have different sizes, the two young birds hatch at different times and have different sizes. The juvenile bird is dark black-brown for the most part of its body, with a buff-brown breast, and matures in five years. Except for shrill whistles during breeding displays and a falcon-like cheek-acheek call around the nest, the bearded vulture is deafeningly quiet. It is a scavenger, like other vultures, and feeds mostly on the remains of dead animals. The bearded vulture’s diet consists mainly of mammals (93 percent), birds (6%), and reptiles (1%), with medium-sized ungulates accounting for a significant portion of the diet. It normally shuns meat and feeds on bone marrow, which accounts for 85–90% of its diet. This is the only living bird species that eat marrow exclusively. Bearded Vultures have a wide variety of habitats. They were once found in almost every mountain range in Eurasia. Strong stocks can still be found in the Himalayas and Central Asia today. In the mountains of eastern and southern Africa, there is also a distinct subspecies.