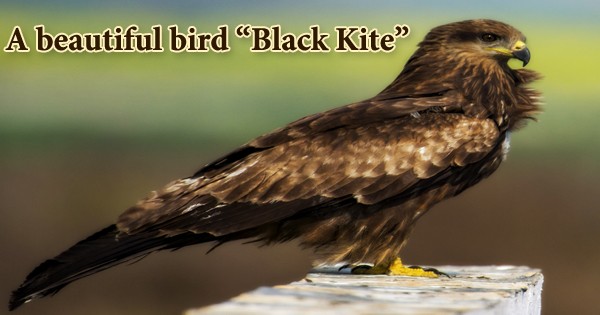 The black kite (Milvus migrans) is a medium-sized raptor (bird of prey) belonging to the Accipitridae family. Although certain populations have seen severe decreases or variations, it is believed to be the world’s most numerous Accipitridae species. The Black Kite may be found in a wide range of environments, from wooded waterways to open plains, and is frequently seen in and around outback settlements. The Black Kite may form enormous flocks of thousands of birds, especially during grasshopper infestations, while being more commonly observed in small groups. No other Australian raptor can be found in such big groups. Estimates put the worldwide population at 6 million people. Black kites, unlike the rest of the species, are opportunistic hunters who like to scavenge. On pursuit of food, they spend a lot of time soaring and gliding in thermals. Their unique forked tail and tilted wing make them easy to see. Europe, Africa, the Middle East, the Indian subcontinent, Central Asia, Siberia, China, Japan, Korea, and Indochina, as well as Sulawesi, the Lesser Sundas, Papua New Guinea, and northern Australia, with northern temperate populations wintering in Africa, the Indian subcontinent, and Southeast Asia. The majority of these birds are black in color. Although the top plumage is brown, the head and neck are lighter. The area around the eye looks to be darker. The outer flight feathers are black, and the inner flight feathers are speckled at the base and feature dark crossbars. The bottom half of the body is pale brown, and it gets lighter as it gets closer to the chin. The black shafts of the body feathers give it a streaking look. The bill is black, while the cere and gape are yellow. The claws are black and the legs are yellow. Males and females have similar plumage, although females are longer. They have a loud whinnying cry and are quite vocal. This kite may be found in temperate and tropical portions of Eurasia, as well as areas of Australasia and Oceania, with migratory populations in the temperate regions. Several subspecies have been identified, each with its own English name. The European population is modest, while the population of South Asia is enormous. Adult Brahminy Kites are similar to young Brahminy Kites, but have darker overall plumage, a unique forked tail that appears almost square-cut when widely fanned in flight, and a prominent white patch on the base of the primary. Although the juvenile looks like an adult, it has noticeable whitish stripes on the breast and belly.

Black kites may be found in a broad range of environments, including marshes, river margins, coastlines, grassland, open savannas, shrubland, and woods, as well as major cities. These birds, on the other hand, shun thick woods and steep mountains. It seems virtually black from afar, with a light brown stripe on the shoulder. The male is somewhat smaller and less aggressive than the female (this is the case in most birds of prey). Although the top plumage is brown, the head and neck are lighter. The area around the eye looks to be darker. The outer flight feathers are black, and the inner flight feathers are speckled at the base and feature dark crossbars. The bottom half of the body is pale brown, and it gets lighter as it gets closer to the chin. The black shafts of the body feathers give it a streaking look. Young Black Kites are usually paler in color than adults and have a shallower forked tail than adults. Males and females have the same plumage, although females are somewhat longer and have a wider wingspan than males. Their wingspan is around 150 centimeters. Black kites are social raptors that congregate in large communal roosts during the winter. These birds hunt throughout the day and are frequently observed gliding and soaring on thermals in pursuit of prey. They swoop down with their legs down to snare tiny live prey, fish, domestic waste, and carrion, earning the nickname “shite-hawk” in British military jargon. Indian inhabitants are well-adapted to city life and can be found in highly crowded places. Thousands of them may be seen soaring on thermals over cities. They will quickly swoop down and steal food held by people in some areas. Black kites have a characteristic sharp whistle followed by a fast whinnying cry that they use to communicate. Lizards, small animals, and insects, particularly grasshoppers, are prey for the Black Kite. It’s also a scavenger who frequents rural communities for tips. Around bushfires, black kites congregate in groups and gleefully pounce on tiny animals fleeing the flames. Prey is eaten both alive and dead (carrion). Kites congregate in vast communal roosts throughout the winter. Before settling at the roost, flocks may fly around. When migrating, the black kite is more likely than other migratory raptors to assemble huge flocks, especially before crossing a body of water. The nests are erected on tree branches, rock ledges, and structures, and they can be reused in the future. They’re fashioned out of sticks and twigs, and sometimes colorful materials like white plastic are used to adorn them. Both the male and female help build the nest, incubate the eggs, and care for the young. The average clutch size is two or three eggs. The incubation phase might last anywhere from 30 to 34 days. The backs of newly hatched chicks are sepia, with black around the eyes and buff on the head, neck, and underparts. After 18 to 22 days, body feathers begin to emerge. Around 17-19 days, the nestlings can stand on their own two feet and begin flapping their wings after 27-31 days. They begin to migrate to branches around the nest after 50 days. Black kites frequently perch on power lines and are frequently electrocuted. Collisions with automobiles occur as a result of their propensity of swooping to pick up dead rats or other roadkill. There have been reports of widespread poisoning in agricultural areas as a result of eating poisoned voles. They’re also a huge annoyance at several airports, where their size poses a substantial risk of birdstrike. The Black kite is a big raptorial bird with few natural predators. However, they do have a single serious predator: the Eurasian eagle-owl. The eagle-owl readily takes off kites of all ages, from nestlings to adults, and has been seen in the Italian Alps to drastically reduce kite reproductive success when nesting within kilometers of the kites.