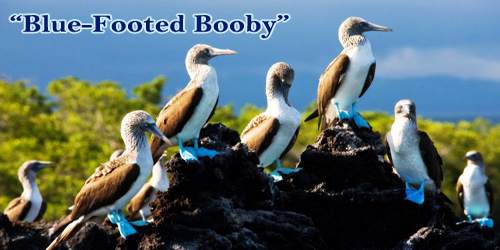 A seabird known for its very distinctive bright blue feet is the blue-footed booby (Sula nebouxii). It is a marine bird native to the eastern Pacific Ocean’s subtropical and tropical regions. It is one of six species known as boobies, of the genus Sula. Their feet turn blue as individuals of this species become older, a secondary sex trait used to attract mates in courtship behavior. The name “booby” comes from the Spanish word ‘bobo’ meaning foolish and describes these species’ clumsiness on land and willingness to approach people. In an elaborate mating ritual, males show their feet by raising them up and down while strutting against the female. The female is slightly larger than the male and, with a wingspan of up to 1.5 m (5 ft), can measure up to 90 cm (35 in) long. These boobies live off Central and South America’s West Coasts. The population of the Galápagos Islands comprises about half of all Blue-footed Boobies breeding pairs. Blue-footed boobies feed by plunging at high speeds into surface waters and pursuing their prey underwater. This action is also done in communities, where large groups of schooling fish are targeted by booby squadrons. Blue-foots nest at night on land, like other boobies. They take to the air in search of seafood as the day breaks, and sometimes fish in cooperative groups. Typically, the blue-footed booby lays one to three eggs at a time. They fold back across their sleek bodies with their long wings and fall from as far as 80 feet into the sea. Blue-footed boobies will dive from a sitting position on the surface of the water as well. Their webbed feet are often used to cover their young and keep them warm. Both parents feed and care for them while a typical brood of one to three chicks is hatching. 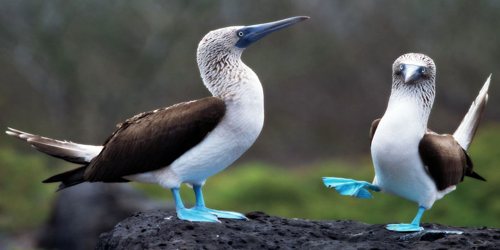 On average the blue-footed booby is 81 cm (32 in) long and weighs 1.5 kg (3.3 lb), with the female slightly larger than the male. Their wings are long, pointed, and colored brown. Adults have brilliant blue feet and pale head and neck stripes of grayish brown. Young birds have brown feet on their head, neck, and chest, with darker brown streaks. The blue-footed booby’s neck and head are light browns with white stripes, while pure white plumage is seen on the belly and underside. On either side of its bill, its eyes are positioned and directed towards the front, allowing excellent binocular vision. Its eyes are a distinctive yellow, with the male getting more yellow than the female in his irises. Once a female selects a male, the pair remains monogamous for a minimum of that breeding season. After mating, clutches of two to 3 eggs are laid directly on the bottom, and both parents alternate incubating the eggs. Blue-footed Boobies spend much of the day fishing, often in flocks. They patrol by flying over the water and then easily and often dive from great heights to capture fish they find. They spend the rest of the day relaxing and preening on the water or a comfortable perch (piling, buoy, rock, etc.). Females start breeding after they are one to six years old, while males start breeding after they are two to six years old. Blue-footed Boobies are almost exclusively found in marine environments, but usually shortly from the land. Only on rare occasions are they found on inland lakes. On land, they have no natural predators and few natural ocean predators. They’re also very curious, naturally. Therefore, if confronted by people on land, they usually do not become frightened, and they instead land on boats to explore individuals while at sea.