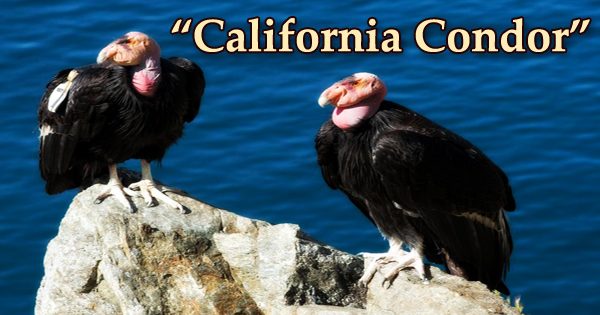 The California condor (Gymnogyps californianus) is North America’s largest flying bird. It’s a New World vulture with wings that may reach about ten feet in length from tip to tip. When in flight, this massive bird flies at a breathtaking 15,000 feet, gliding on air currents. It was declared extinct in the wild in 1987 after all surviving wild individuals were captured, but it has since been reintroduced to northern Arizona and southern Utah (including the Grand Canyon and Zion National Park), the coastal mountains of central and southern California, and northern Baja California in Mexico. California condors are recognized for their massive black wings, excellent eyesight, and inquisitive, engaging intellect. They can live for up to 60 years in the wild, but they don’t reach sexual maturity until they’re six or seven years old and only deposit one egg per year. The bird’s sluggish maturation and the reproductive process has contributed to its decline and near-extinction. It has the greatest wingspan of any North American bird, with a wingspan of 3.0 m (9.8 ft) and a weight of up to 12 kg (26 lb), nearly equaling that of the trumpeter swan, the heaviest of native North American bird species. The condor is a scavenger that eats a lot of dead animals. The birds previously had a vast range that stretched as far east as Florida and New York, according to fossil records. Because of the loss of the enormous prehistoric herds that once roamed the continent before Europeans came, they now only live in a fraction of that range. Condors currently largely inhabit the deserts of central and southern California, where they sleep on steep cliffs. Populations can also be found in Arizona, Utah, and Mexico. Poaching, lead poisoning, and habitat destruction all contributed to condor population declines in the twentieth century. The condor is revered by indigenous communities in North America and is regarded as a powerful emblem. Some people nickname it the thunderbird because they believe the bird’s massive wings deliver thunder to the heavens. The broad, triangular white patch under each wing distinguishes it from other vultures in flight. Condors were reintroduced into the wild in 1991 after their numbers increased due to captive breeding. Although its population has increased since then, the California condor remains one of the world’s rarer bird species, with only 518 living in the wild or in captivity as of 2019. Condors are scavengers who feed on the carcasses of large mammals such as cattle and deer, just like other vultures. When a large meal is provided, the birds may overeat to the point of needing to rest for several hours before flying again. Condors may fly hundreds of miles a day in search of food, yet they spend the majority of their time at their roost preening, sunbathing, and grooming.

California condors are the world’s largest wild birds. The wings are quite long and broad, with long main feathers giving the wingtips a fingered appearance. The body appears hefty in flight, the head appears small, and the tail is short and broad. California condors are a sight to behold when in flight. That’s when their amazing wings come to life, showing that unique white patch. Gray legs and feet, an ivorybill, a frill of black feathers around the base of the neck, and brownish-red eyes characterize this bird. The youngster is a mottled dark brown with a blackish head coloring. The underside of its flight feathers are speckled gray rather than white. Condors can soar because of the structure of their wings and the positioning of their feathers. Condors catch thermal air currents that rise up when the sun heats the ground, and they may stay aloft for hours, flying over the skies while scanning the fields below, thanks to their massive wings. They can fly at speeds of up to 55 miles per hour (88 kilometers per hour) and up to 15,000 feet in height (4,600 meters). Adults have prominent white markings under their wings and are black. The head and neck are a yellowish-orange color when they aren’t clothed. Immatures have dark heads, grayer necks, and mottled grayish patches under the wings instead of clear white patches. At the age of 6-8 years, children get adult coloring. A rare anomaly among birds of prey, the female condor is smaller than the male. The overall length is between 109 and 140 cm (43 and 55 in), while the wingspan is between 2.49 and 3 m. (8.2 to 9.8 ft). Their weight varies between 7 and 14.1 kg (15 and 31 lb), with typical weight estimates ranging between 8 and 9 kg (18 to 20 lb). There have been reports of wingspan up to 3.4 m (11 ft), but no wingspan more than 3.05 m (10.0 ft) has been verified. Carrion is scavenged by California condors in a variety of environments, from Pacific beaches to alpine forests and meadows. They build their nests in caverns on cliff faces up to 6,000 feet in elevation. Because their size makes takeoff difficult, they prefer to take off from high perches. The middle toe of the California condor’s foot is quite lengthy, whereas the hind toe is hardly developed. All of the toes’ talons are straight and blunt, making them better suited to walking than clutching. Condors also bathe repeatedly, smoothing and drying their feathers for hours. They even have a strong immune system that prevents them from being ill from bacteria they may come into contact with while eating on decomposing wildlife. Every alternate year, a mated female lays one bluish-white egg. Eggs are laid as early as January to as late as April. The egg is roughly 280 grams (10 oz), with a length of 90 to 120 mm (3.5 to 4.7 in) and a breadth of 67 mm (2.6 in). Both parents incubate the eggs for 53 to 60 days before they hatch. Condors, like all vultures, eat on dead animals, preferring huge corpses like deer, cattle, sheep, and even whales. As part of the recovery initiative, the first California condor was transported into a zoo in 1982. He was given the name Xolxol after his parents neglected him because they were still raising a chick from the previous year; he was successfully grown in Safari Park. The first condors born in zoos were released into native California habitat in the Los Angeles National Forest in 1992.