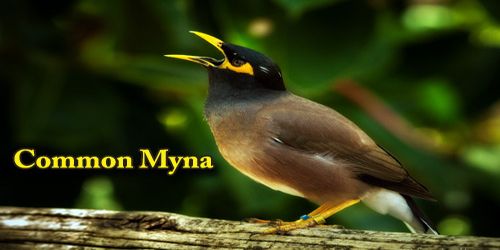 The common myna (Acridotheres tristis), sometimes spelled mynah, is sometimes confused with the slightly larger (24 cm-29 cm) Noisy Miner, Manorina melanocephala. It is a member of the Asian-born Sturnidae family (starlings and mynas). Though both species have similar common names, the Noisy Miner is in fact an indigenous honeyeater. Both have yellow bills, legs, and bare eye skin, but the Common Myna is brown with a black head and shows big white wing patches in flight. For the most part, the Noisy Miner is grey. An omnivorous open forest bird with a strong territorial instinct, the common myna is extremely well adapted to urban environments. Their natural breeding range extends from Afghanistan to Bangladesh, via India and Sri Lanka. Except for South America, they were introduced to many of the world’s tropical areas. The range of the common myna is increasing at such a rapid rate that in 2000 the IUCN Species Survival Commission declared it one of the world’s most invasive species and one of only three birds listed among “100 of the World’s Worst Invasive Species” that pose a threat to biodiversity, agriculture and human interests. Common mynas occupy a vast array of habitats in warm areas with water access. Common mynas in their native range inhabit open agricultural areas such as farmlands and towns. They are often found in the outskirts of cities, and also in desert or forest outlying homes. 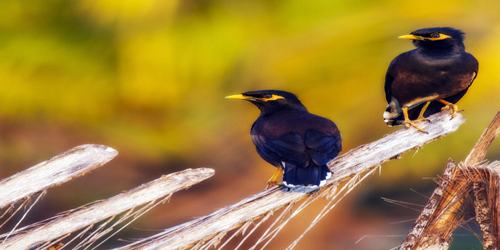 The Common Myna is black-headed brown. It has a bill of yellow skin, legs, and bare eye. In-flight it displays large patches of white wings. The Common Myna is a starling family member and is also known as the Myna Indian or Mynah Indian. They tend to circumvent dense vegetation. They are most frequent in dry forests and partially open forests. The calls include croaks, squawks, chirps, clicks, whistles, and ‘growls’, and the bird frequently fluffs its feathers and sings its head. The common myna screeches warnings in case of nearby predators or when it is about to take off flying to its mate or other birds. Common mynas are popular for their singing and “speaking” skills as cage birds. Before sleeping in the roots of the community, common mynas vocalize in unison, known as “common noise.” Common Myna is intimately linked to human habitation. Large Common Mynas groups gather in communal roosts at night, mainly in the non-breeding season, in roof voids, bridges, and large trees, and numbers can reach up to several thousand. They are accomplished scavengers, feeding on almost anything, including insects, fruits and vegetables, scraps, food for pets, and even sparrows that are fledgling. There’s generally considerable competition for nesting sites during the breeding season. Favored places are in buildings’ walls and ceilings, making these birds a nuisance to humans. Nests are also set in tree hollows used by native birds. Nests are fairly messy and consist of a range of materials. Leaves, grasses, feathers, and assorted rubbish items are common materials. 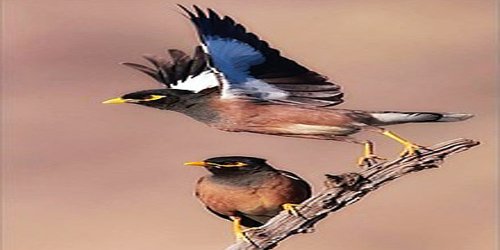 Common mynas range in body length from 23 to 26 cm, weigh anywhere from 82 to 143 grams, and have a wingspan of 120 to 142 mm. For the most part, the male is only slightly larger, with greater body mass and wingspan, the female and the male are monomorphic. They breed in the Himalayas from sea-level up to 3,000 m. The normal size of this clutch is 4–6 eggs. The average egg size is 30.8 x 21.99 mm. The incubation period is between 17 and 18 days and the fledging period is between 22 and 24 days. Tissue paper, tin foil, and sloughed off snake-skin were common mynas known to use. Common Mynas are generally not considered pests in southern Asia, as flocks follow the plough to feast on the insects and grubs that have turned up with the soil. But their fruit-eating habits in Australia make them a pest for fruit trees, especially figs. Common mynas can cause significant damage to ripening fruit, especially grapes, but also figs, apples, pears, strawberries, guava, mangoes, and breadfruit. The life span of common mynas is little known. Reports suggest that both sexes have an average life expectancy of 4 years. Food or resource shortages are the biggest limiting factor in the survival of common myna. Other factors that contribute to mortality rates are poor nest site selection and unfavorable weather conditions.