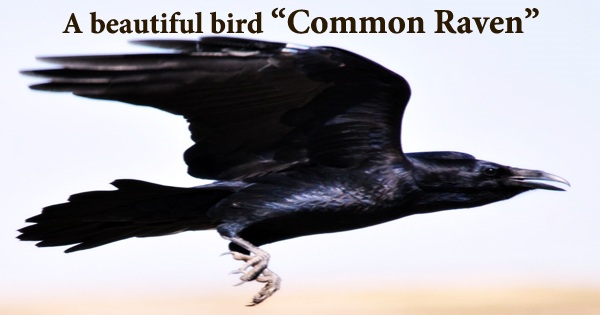 The common raven (Corvus corax), sometimes known as the western raven or northern raven, is a large black bird that belongs to the crow family. It is the crow family’s largest member. It is the most widely spread of the corvids, being found throughout the Northern Hemisphere. Although a recent study has revealed considerable genetic differences among populations from diverse places, there are at least eight subspecies with little diversity in appearance. Ravens, especially common ravens, are truly extraordinary creatures. These sleek, blackbirds can fly as well as falcons and hawks and are equally adept at acrobatics. During the breeding season, when intense mating rituals include an intricate dance of chases, dives, and rolls, such aerial skills are on display. The common raven, along with the thick-billed raven, is one of the two largest corvids and possibly the heaviest passerine bird; at maturity, it is 63 centimeters (25 inches) in length and weighs 1.2 kilograms (2.6 pounds). Although their usual lifespan is much shorter, common ravens can live in the wild for more than 23 years, which is only surpassed by a few Australian species such as the satin bowerbird and probably the lyrebirds among passerines. Young birds wander in flocks, but they eventually mate for life, with each mated couple guarding its own territory. Native Americans revered these intelligent birds, who were sometimes depicted as cunning pranksters due to their playful disposition. It is a sophisticated and amazingly adaptable bird that lives as a scavenger and predator in a variety of environments, including the hot desert and the high Arctic tundra. For thousands of years, common ravens have coexisted with humans, and in certain locations, they have become so abundant that they are considered pests. Their omnivorous diet contributes to their survival as a species: they eat carrion, insects, cereal grains, berries, fruit, small animals, nesting birds, and food waste, among other things. Ravens primarily breed in the west and north, though their range is increasingly moving eastward. Although some birds, particularly non-breeders and young birds, move from their breeding regions but do not travel far, the majority of birds are residents. Ravens, often known as scavengers, are capable hunters who occasionally work together. Ravens have been known to hunt down game that is too huge for a single bird to handle. They also eat rodents, grains, worms, and insects, as well as the eggs and nestlings of other birds, such as coastal seabirds. Ravens eat carrion and occasionally human waste. It has been the topic of mythology, folklore, art, and literature for millennia. The common raven has long been honored as a spiritual figure or godlike creature in many cultures, including Scandinavian indigenous cultures, ancient Ireland and Wales, Bhutan, the northwest coast of North America, and Siberia and northeast Asia.

Ravens have long, wedge-shaped tails when flying. They have longer, narrower wings than crows, as well as longer, thinner “fingers” at the wingtips. A mature common raven measures 54–67 cm (21–26″) in length and has a wingspan of 115–150 cm (45–51″). The common raven weighs between 0.69 and 2 kg (1.5 and 4.4 lb), making it one of the heaviest passerines. With a culmen length of 5.7 to 8.5 cm (2.2 to 3.3 in), the bill is big and somewhat curved, undoubtedly one of the longest bills among passerines (perhaps only the thick-billed raven has a noticeably larger bill). It has a longish, sharply graduated tail that measures 20 to 26.3 cm (7.9 to 10.4 in) in length, and predominantly black iridescent plumage with a dark brown iris. The entire body of a Common Raven is black, including the legs, eyes, and beak. The neck feathers’ bases are pale brownish-grey, while the throat feathers are elongated and pointed. With a tarsus length of 6 to 7.2 cm, the legs and feet are large (2.4 to 2.8 in). The juvenile plumage is similar to the adult plumage, but it is duller and has a blue-grey iris. Ravens are assertive, curious birds who strut around or occasionally run ahead with light, two-footed hops. They are not as gregarious as crows. They are buoyant and graceful in flight, with soaring, gliding, and gradual flaps interspersed. Despite their size, ravens are as nimble as their smaller cousins in flying. The feathers make a creaking sound in flight that has been compared to the rustling of silk. Throughout western and northern North America, common ravens can be found in both open and wooded areas. This encompasses deciduous and evergreen woods up to tree line, high desert, sea coast, sagebrush, tundra, and grasslands, as well as sagebrush, tundra, and grasslands. They thrive in populated areas, particularly in rural areas, but even in some towns and cities. In the winter, flocks of common ravens may congregate to forage during the day and roost at night. They are frequently paired or in small groups during the rest of the year. Ravens are thought to be monogamous. Each spring, the females construct huge stick nests in which they lay three to seven eggs. Both parents are responsible for their children, who are dependent for several months. Common ravens can be found in a variety of habitats, but they favor strongly contoured landscapes. These birds will exhibit a stress response when their environment changes dramatically. Females deposit three to seven pale bluish-green eggs with brown blotches. Only the female is responsible for incubation, which takes 18 to 21 days. The male may stand or kneel over the young, providing protection but not brooding. At 35 to 42 days, the young fledge and are fed by both parents. After fledging, they stay with their parents for another six months. Common ravens usually make a croaking sound, but they also have a variety of other cries. Ravens are North America’s largest passerine (perching) birds. They were originally regarded to be pests that posed a threat to game birds and domestic animals; thus, they were eradicated. Ravens have been observed stealing and storing sparkling things such as pebbles, metal fragments, and golf balls. One explanation proposes that they collect sparkling objects in order to impress other ravens. Today, populations are growing, and the birds may be seen all over the Northern Hemisphere, from the cold Arctic to the Mediterranean, as well as in cities.