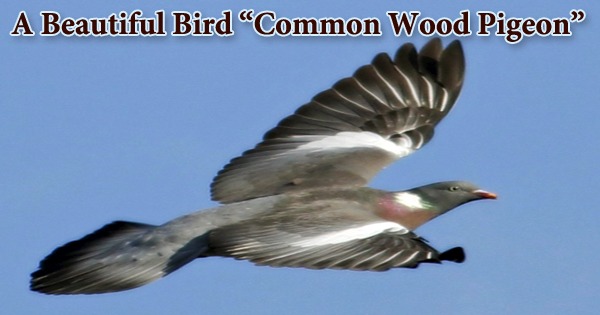 The common wood pigeon (Columba palumbus) is a large bird (species) of the Columbinae subfamily (in the pigeon family, Columbidae), found from Europe, North Africa, and western Asia east to the mountains of Sikkim state in India. It belongs to the dove and pigeon family and is a large species. It is locally known as the “culver” in southeast England, and it has inspired the names of many pigeon-keeping areas, including Culver Down. It’s grayish with a white collar and white bars on the wings, and it’s about 40 cm (16 inches) long. Mating is followed by the male’s “courtship feeding” of the female. They have two clutches each year and can raise three broods. This large pigeon feeds on seeds, grains, and berries on the ground, and has been known to carry more than 60 acorns in its harvest. In agricultural areas, it may be a pest. Wood pigeons are found in Europe, Asia, and northern Africa. They are refugees in the colder northern and eastern parts of Europe and western Asia, but they are also plentiful residents in southern and western Europe. Wood pigeons can be found in parks, gardens, towns, and villages, and they live in deciduous or coniferous woodlands, shrubland, and cultivated areas. The distinctive ring around the neck gave it its common name. Carl Linnaeus, a Swedish naturalist, first described the common wood pigeon in the tenth edition of his Systema Naturae in 1758. He grouped it with the other Columba pigeons and gave it the binomial name Columba palumbus. Palumbus is derived from the Latin word palumbes, which means “wood pigeon.” Other Columbinae species, such as the speckled wood pigeon, ashy wood pigeon, purple wood pigeon, Japanese wood pigeon, and others, are also known as wood pigeons. They can be found all over Southeast Asia and the Pacific.

Diurnal birds, common wood pigeons spend their days perching, eating, and flying. Their flight is fast, with frequent beats and the occasional sharp flick of the wings that pigeons have in general. They normally make a loud clattering noise when they take off. Outside of the breeding season, common wood pigeons are gregarious, forming large flocks. Like many species of pigeon, wood pigeons take advantage of trees and buildings to gain a vantage point over the surrounding area, and their distinctive cooing ‘coo-COO-coo-coo-coo’ means that they are usually heard before they are seen. The white on its neck and wing, as well as its larger size of 38–44.5 cm (15.0–17.5 in) and weight of 300–615 g (10.6–21.7 oz), distinguish the common wood pigeon. Aside from that, it’s a grey bird with a pinkish breast. The wingspan can be anywhere between 68 and 80 cm (27 to 31 in), and the wing chord can be anywhere between 24 and 25.4 cm (9.4 to 10.0 in). The tail is 13.8–15 cm (5.4–5.9 in) long, the bill is 1.9–2.2 cm (0.75–0.87 in) long, and the tarsus is 2.5–2.8 cm long (0.98 to 1.10 in). White markings can be seen at the bend of the wings, and white lines can be seen down the center of the wing in flight. On either side of the collar, adults have a white band. Herbivores, common wood pigeons (folivores, granivores, frugivores). The majority of their diet consists of round and fleshy leaves from open fields, gardens, and lawns. Young shoots and seedlings, corn, pine nuts, and some fruits and berries are also favorites. They eat figs and acorns in the fall, and tree and bushes buds in the winter. Wood pigeons can consume larvae, ants, and small worms on occasion. The average lifespan of a wood pigeon is 3-5 years, although they have been known to live up to 15 years on rare occasions. Because of their rural location, their nests are often preyed upon by predators such as crows; however, young wood pigeons may live on their own as soon as 20 days after hatching. Around 33 days, the majority of the young will fledge. If there is enough food, the breeding season of Common wood pigeons can occur at any time of year; however, it is most common in the autumn, between the months of August and September. During the breeding season, males show aggressive behavior by jumping and flapping their wings at each other. During the hot summer months, their plumage darkens dramatically, particularly on the head. The male perches well and walks along a horizontal branch with a swollen neck, lowered wings, and fanned tail while performing his courtship display. The bird climbs during the show flight, then cracks its wings like whiplash and glides down on rigid wings. Mated pairs build simple stick nests in trees in forests, parks, and gardens, laying two white eggs that hatch after 17-19 days. Pigeons, like swans, are known to mate for life; there are currently no significant threats to the Common wood pigeon.