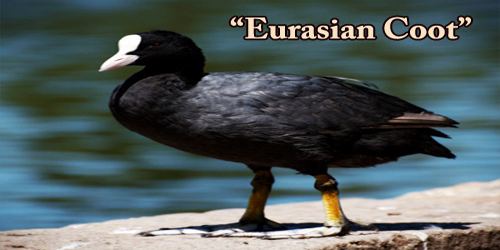 A member of the rail and crake bird family, the Rallidae, is the Eurasian coot (Fulica atra), also known as the common coot, or Australian coot. It is present in parts of Europe, Asia, Australia, New Zealand, and North Africa. It has a slaty-black body, a glossy blackhead, and a white front shield bill. The sexes are similar. Via its snowy white bill and forehead shield, the Eurasian Coot is known. The remainder of the pet, with the exception of its bright red eye, is dark sooty brown. In general, immature birds are paler than adults with a whitewash on their throats. There are downy nestlings, black with fine yellow tips. The head is orange-red, with a cream-white tip on the bill. This species was formally described in the tenth edition of his Systema Naturae under its current binomial name Fulica atra by the Swedish naturalist Carl Linnaeus in 1758. The position was known by Linnaeus as Europe, but it is now confined to Sweden. The binomial name is from Latin: Fulica means “coot” and atra mean “black”. The only bird that can be confused with the Eurasian Coot is the similarly sized, dark grey Dusky Moorhen. These species are sometimes found together but with a yellow tip, the Dusky Moorhen has a reddish-orange head shield and bill. It is often seen running across the surface of the water or swimming in massive flocks on large wetlands, but on small ponds, they occur as often. They need submerged aquatic vegetation or floating waterweed mats between which they forage, dive for up to 20 seconds below the surface, or pluck the stems of emergent shoots. 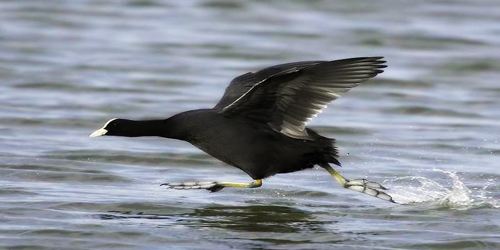 The Eurasian coot is 36-42 cm long and, with the exception of the white facial shield, is entirely black (which gave rise to the term “as bald as a coot,” which was used as early as 1430 in the Oxford English Dictionary). The Coot has partial webbing on its long, sturdy toes as a swimming animal. The coot has partial webbing on its long, sturdy toes as a swimming animal. Apparently the sexes are identical. The juvenile is pale than the adult, has a whitish breast, and lacks the facial shield; the adult black plumage develops at about 3–4 months of age, but the white shield is only completely formed at about a year of age. This is a noisy bird with a wide repertoire of crackling, explosive, or trumpeting calls, often given at night. The Eurasian Coot ranges from Indonesia, New Guinea, and Australia to Eurasia. Also recently, birds have been transported to New Zealand, and the population is rapidly establishing itself. Food is mainly collected during underwater dives, with a length of up to 15 seconds, and a depth of 7 m. Birds also graze on the land and on the surface of the water. In Australia, Eurasian Coots feed almost entirely on the matter, supplemented with only some insects, worms, and fish. Birds of the hemisphere tend to require way more animal prey. This species constructs a nest of dead reeds or grasses, but also pieces of paper or plastic that lay up to 10 eggs, often 2 or 3 times per season, near the water’s edge or on underwater obstacles protruding from the water. Only a few young people typically succeed. For birds like herons and gulls, they are regular prey. Coots are very brutal to their own young struggling like the shortage of food. They’ll bite young that are begging for food and repeatedly try this until it stops begging and starves to death. But if the begging goes on, they can even bite so hard that they kill the chick.  The Eurasian coot is one of the species to which the Agreement on the Conservation of African-Eurasian Migratory Waterbirds (AEWA) applies.