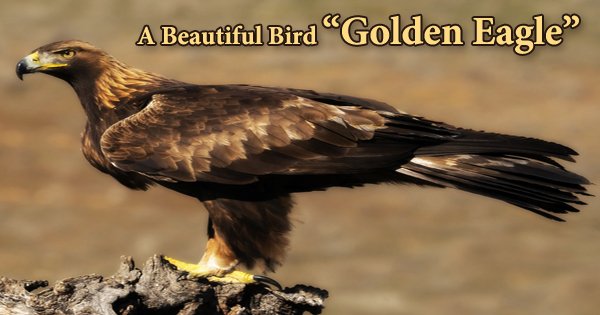 The golden eagle (Aquila chrysaetos) is one of North America’s most well-known birds of prey. Golden eagle is a dark brown eagle with golden lanceolate nape feathers (hackles), dark eyes, yellow cere, gray beak, entirely feathered wings, large yellow feet, and great talons. It has a wingspan of 2.3 meters (almost 8 feet). It is Mexico’s national bird. Golden eagles catch a variety of prey, mostly hares, rabbits, and marmots, and other ground squirrels, with their agility and speed, strong feet, and large, sharp talons. They are incredibly agile, capable of diving at speeds of more than 150 miles per hour on their prey. Carrion, reptiles, birds, fish, and smaller prey such as large insects are also eaten by them. And full-grown deer have been known to be targeted by them. Many ranchers used to kill these birds because they were afraid, they would prey on their livestock, but studies have shown that their effect is limited. The home ranges or territories of golden eagles may be as wide as 200 km2 (77 sq mi). They build large nests in cliffs and other high locations, which they can return to for many breeding seasons. The majority of breeding occurs in the spring; they are monogamous and will stay together for many years, if not forever. Females can lay up to four eggs, which they then incubate for six weeks. Males and females look alike, but females are significantly larger than males. Females weigh between 3940 and 6125 grams, while men weigh between 3000 and 4475 grams. Except for a golden area near the crown, nape, and sides of the neck and ears, adults are mostly dark brown. Grayish brown is the color of the tail. The broad flight feathers of the wings appear brownish gray from below, while the head, body, and smaller feathers on the open wings’ forepart appear blackish. Adults’ eyes are a dark brown color. The cere and feet are yellow, while the bills and claws are black. All the way down to the toes, the legs are feathered.

The golden eagle can be found throughout North America, from central Mexico to Alaska and Newfoundland, along the Pacific coast and across the Rocky Mountains. Small numbers can be found as far south as North Carolina in the Appalachian Mountains. This species has long been recognized as one of the most prestigious falconry birds. The golden eagle is treated with great mystic respect in some ancient tribal cultures due to its hunting prowess. In some parts of its range, such as the Western United States and the Western Palearctic, it is one of the most studied raptor species on the planet. The back of the head and neck of adult Golden Eagles are dark brown with a golden sheen. Young birds have neatly established white spots at the base of the tail and in the wings for the first few years of their lives. Golden eagle pairs may have territories that are up to 60 square miles in size. They are monogamous and may stay with their partner for several years or even for the rest of their lives. Males and females of the largest subspecies (A. c. daphanea) normally weigh 4.05 kg (8.9 lb) and 6.35 kg (14.0 lb), respectively. Males weigh 2.5 kg (5.5 lb) and females 3.25 kg in the smallest subspecies, A. c. japonica (7.2 lb). Males weigh around 3.6 kg (7.9 lb) on average, while females weigh around 5.1 kg (11 lb). Golden Eagles fly or glide with their wings raised into a slight “V” and their wingtip feathers spread out like fingers. They are usually found alone or in pairs. Soaring, flying low over the ground, or stalking from a perch, they capture prey on or near the ground. Golden eagles build their nests on cliffs, trees, or man-made structures like telephone poles. They build massive nests to which they can return for several years of breeding. Females lay one to four eggs, which are incubated by both parents for 40 to 45 days. Light patches on the tips of the wings, a broad white band on the tail, and a black terminal band differentiate juvenile golden eagles from adults. Because of the bands, this plumage is often referred to as “ringtail” plumage. Between the ages of 4 and 6, juveniles develop adult plumage. These birds will soar for long periods of time without exerting much effort. They do this by catching expanding masses of warm air, which propels them upward in a spiral motion. Golden eagles tuck their wings and swoop at speeds of up to 322 kph (200 mph) when they spot prey while soaring; some claim it sounds like a tiny, low-flying airplane. A fully grown golden eagle needs about 230 to 250 g (8.1 to 8.8 oz) of food each day, but most eagles go through periods of feast and famine, with eagles going without food for up to a week until gorged on up to 900 g (2.0 lb) in one sitting. Eagles play a vital role in the climate. They contribute to nature’s clean-up process by consuming dead animal matter. Since eagles are also hunters, they help to maintain healthy animal populations. They do this by removing the poor, aged, and slower animals, leaving only the healthiest to live. Carrion is also consumed by the birds, which may result in death due to vehicle crashes or poisoning. Asia, northern Africa, and Europe are all home to golden eagles. Depending on the circumstances in their geographic area, some golden eagles migrate, while others do not. Alaskan and Canadian eagles, for example, migrate south in the fall, while birds in the western continental United States stay in their ranges all year.