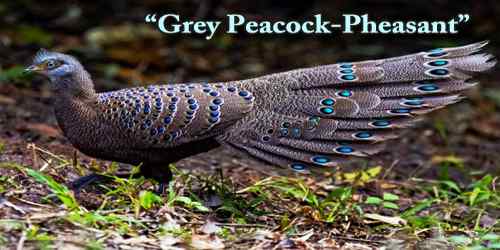 The gray peacock-pheasant (Polyplectron bicalcaratum) is a Pheasant inhabiting Northeast India and Southeast Asia’s lowland and hill forests. It is also known as the peacock-pheasant in Burma. It is a large, grayish-brown pheasant up to 76 cm long, with finely spotted green ocelli, elongated bushy crest, bare pink or yellow facial skin, white throat, and gray iris, bill, and legs. Males and females look alike. The female is smaller than the male and darker. The young is close to the old. The Grey Peacock-Pheasant has 3 accepted subspecies while an additional one is of uncertain validity. The grey peacock-pheasant is distributed in lowland and hill forests of Bangladesh, Northeast India, and Southeast Asia, but excluding most of Indochina as well as the entire Malayan Peninsula. The diet is primarily composed of grains, termites, fruits, and invertebrates. The grey peacock-pheasant, common in its wide range, is listed on the IUCN Red List of Endangered Species as a Species of Least Concern. It is listed in Appendix II of CITES which restricts trade in wild-caught birds in order to preserve their stocks. 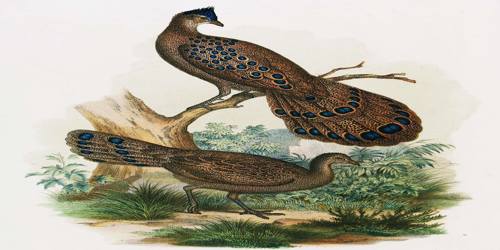 The Grey Peacock-Pheasant’s breeding season starts in March and may last until July. Typically the females lay 2 eggs per clutch that are incubated for around 21 days. The Grey Peacock-Pheasant is Myanmar’s national bird, as well. The ovomucin sequence on the grey and the bronze-tailed peacock-pheasant appears to have evolved convergent or with a decreased mutational rate. The grey peacock-pheasant lives in the dense tropical forest up to 1,300 meters above sea level. They consume a number of foods including berries, vegetables, nuts, wild figs, grubs, snails, and insects. While on the molecular level they are very similar, the distance and interspersed populations of their closest relatives argue against a common ancestor far more recently shared between them and the other two “northern” peacock-phesians. They are lovely little birds which are not as delicate as they look. The cock puts on a wonderful display for his partner showing of all his beautiful plumage. The male stretches its wings and tail all over behind him and leans forward over his beak with his crown feathers facing forward.