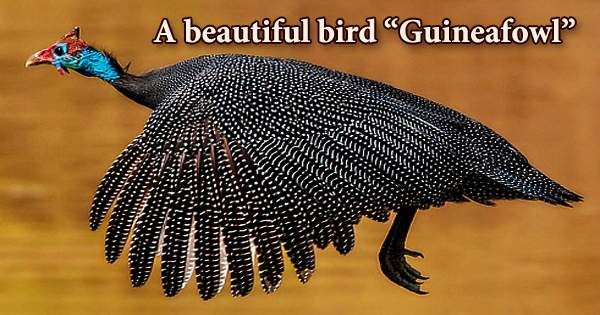 Guineafowl (/ˈɡɪnifaʊl/; sometimes called “pet speckled hens” or “original fowl”), any member of the Numididae (order Galliformes) family of African birds, which some authorities include as part of the Phasianidae pheasant family. They are indigenous to Africa and are among the gallinaceous birds’ oldest species. There are 7–10 species in the family, one of which, Numida meleagris, is widely domesticated for its flesh and as a farm “watchdog” (it gabbles loudly at the least alarm). A lineage of Eocene fossils Telecrex has been linked to guineafowl; Telecrex lived in Mongolia and may have given rise to the earliest real phasianids, such as blood and eared pheasants, which evolved into high-altitude, montane-adapted species when the Tibetan Plateau rose. While modern guineafowl species are confined to Africa, the helmeted guineafowl has been widely domesticated in other parts of the world. The vulturine guinea fowl (Acryllium vulturinum) of eastern Africa is the largest and most colorful species, a long-necked bird with a hackle of long lance-shaped feathers striped black, white, and blue; red eyes; and a vulturelike naked blue head. Guinea chickens are commonly bred for their meat. They can also be used as guard animals because they make a lot of noise when something new comes into the farmyard. Guinea fowl have also been utilized as a natural tick management strategy, particularly in places where Lyme disease is prevalent. The helmeted guineafowl has a large range that extends over much of Africa, encompassing Senegal, Gambia, Guinea-Bissau, Guinea, Sierra Leone, Mali, Côte d’Ivoire, Burkina Faso, Ghana, Togo, Benin, Niger, Nigeria, Chad, Cameroon, Gabon, Congo, The Democratic Republic of the Congo, Angola, Sudan, Ethiopia, Eritrea, Uganda, Kenya, Somalia, Tanzania, Zambia, Malawi, Mozambique, Zimbabwe, Botswana, Namibia, and South Africa. This species is a plump, chicken-sized bird with a distinctive humped back. The slate grey plumage has numerous white patches, the neck is short and featherless, and the little naked head sports a scimitar-shaped bony casque. Sky blue skin with red-tipped wattles and a darker blue throat flap covers the lower face and upper neck. The iris is brown, the cere, forehead, and crown are red, the bill and casque are horn-colored, and the cere, forehead, and crown are red. Brownish-grey down-like feathers cover the lower neck and continue halfway up the back of the upper neck. Lower down, these combine into regular slate-grey body feathers with a dozen or more evenly spaced white spots, giving the overall appearance of speckles. Although both species of the genus Guttera have a unique black crest, and the vulturine guineafowl has a downy brown patch on the nape, these insects and seed-eating, ground-nesting birds resemble partridges but have featherless heads.

The bill is short and thick, the body is stocky and black with white patches all over, and the wings are medium in size and rounded. The male’s wattle is significantly larger than the females. Although the dots on the outer webs blend to produce fine white stripes that align when the wing is closed, providing a barred appearance, the flying feathers are similarly patterned. Domestic stock birds frequently have whitish facial skin, white flight feathers, and irregular white patches on the flanks and belly. The legs of wild-type birds are dark grey, while domestic birds’ legs are orange-brown, with no leg spurs. Females have smaller wattles and shorter and narrower casques, but their sex-specific call is the most distinguishing feature. Young birds have paler face skin and fewer noticeable white patches than adults. Chicks are brownish-grey in color, with black body fringes and developing flying feathers. Their head feathers are brown with black lines running the length of them. Helmeted guineafowl are monomorphic and monochromatic, which means that men and females are the same size, shape, and color. These massive birds range in length from 40 to 71 cm (16–28 in) and weigh 700–1600 g (1.5–3.5 lb). These birds are known for forming monogamous breeding pairs. Adult helmeted guineafowl have white-spotted grey plumage and a bony casque on the head, which distinguishes them from adult female and young wild turkeys and common pheasants. Guineafowls are gregarious creatures who prefer to live in small groups or large flocks. Despite being monogamous, species of the least-derived genera Guttera, Agelastes, and Acryllium are prone to social polyandry, a feature shared with other primitive galliforms like roul roul and Congo peafowl. Guineafowl grazes in excrement and on things that have fallen to the understory from the canopy, following behind herd animals and beneath monkey troups. Ticks, flies, locusts, scorpions, and other invertebrates are all controlled by them, and they remove maggots from carcasses and dung. Some guineafowl species, such as the vulturine, can go for long periods of time without drinking water, relying on their food for moisture. Young guineafowl (known as keets) are extremely sensitive to the elements, especially cold temperatures. Guineafowl thrives in regions with a diverse range of habitats. In areas of regular grassland and pasture, especially when pesticides are routinely applied, populations tend to drop. For sustenance, the ancient Romans domesticated guineafowl. Today, these birds are still kept as pets and hunted. Their population looks to be rather stable and not highly fragmented.