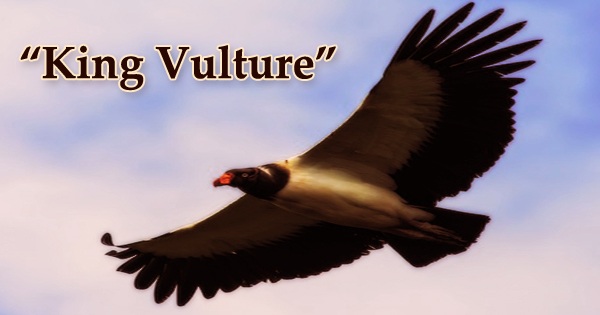 The king vulture (Sarcoramphus papa) has the most vibrantly colored head of any New World vulture, with colors ranging from blue to purple to red to orange. The hummingbird is a big bird that can be found in Central and South America. The tropical lowland woods that range from southern Mexico to northern Argentina are home to this vulture. Although there are fossil members of the genus Sarcoramphus, it is the only living member. These big birds glide along air currents, conserving energy while seeking for dead animals in the woodlands or grasslands below. They serve an ecological niche because of their unappealing eating habits, and by disposing of rotting remnants, they may help to reduce the spread of illness. It has a wingspan of up to six feet and a bill that is more curled than other vulture species. Males and females have the same appearance. Its name comes from its more powerful characteristics, which allow it to feed on the toughest animal carcasses: its greater size, vivid color, and adaptive features. Other birds treat the King vulture as if it were the king; when it flies in, for example, other birds will stop feeding and allow it to eat. The king vulture is a large white bird with gray to black ruff, flight, and tail feathers. The skin color varies, including yellow, orange, blue, purple, and red, and the head and neck are bare. On its beak, the king vulture possesses a large orange fleshy caruncle. As a scavenger, this vulture frequently makes the first cut into a fresh cadaver. Smaller New World vulture species are likewise pushed away from carcasses. In captivity, king vultures have been known to live up to 30 years. Sarcoramphus papa are among the largest scavengers in the bird world, with powerful, hooked beaks that are well-suited to breaking apart difficult corpses. They frequently have access to food that other vultures do not, and smaller birds normally yield when they approach to feed. The Mayan codices, as well as local folklore and medicine, depicted king vultures as popular figures. Despite being classified as least concern by the IUCN, their numbers are declining, owing mostly to habitat loss. These birds build their nests on the ground, and females lay a single egg that is incubated by both parents. Both parents may look after their children, carrying dinner back in their stomachs and regurgitating it for their children to eat.

The King Vulture is native to South and Central America. Argentina, Belize, Brazil, Colombia, Costa Rica, Ecuador, El Salvador, French Guiana, Guatemala, Guyana, Honduras, Mexico, Nicaragua, Panama, Peru, Suriname, Uruguay, and Venezuela are among the countries where they can be found. Some speculate that the vulture’s name comes from a Mayan fable in which the bird was a “king” or “lord” who delivered communications between mankind and the Gods. Its wingspan is 1.2 to 2 m (4–7 ft) and its entire length is 67 to 81 cm (26–32 in). It weighs between 2.7 and 4.5 kg (6–10 lb). The adult king vulture is a large bird with mostly white plumage with a faint rose-yellow hue. The wing coverts, flight feathers, and tail, as well as the distinctive thick neck ruff, are dark grey to black in contrast. King vultures do not congregate in big groups, preferring to stay in small family groupings. They spend most of their time out of sight, either perched high in the canopy or flying around and soaring high above the earth in search of food. They do not move and spend the entire year in the same location. They are a diurnal species, which means they spend much of their time lounging in the sun and conserving energy, as well as preening their wing feathers. Unlike several other vulture species, king vultures have a weak sense of smell, therefore they rely on other vultures to detect prey before descending to engage in the feast. These birds are rarely hostile, preferring to flee rather than fight. Because of their huge bodies and wings, they rely entirely on air currents for flight and only flap their wings when absolutely necessary. Vultures without a voice box (syrinx) or the muscles that make it work are known as king vultures. They have the ability to make very low croaks. When someone approaches their nest during mating, they make warning sounds. Their beaks are black with a bright orange tip. A yellow-colored fleshy wattle protrudes from the top of the beak. Their feet are a shade of grey. Silver, white, or straw-colored eyes are present. Dark-skinned Immature birds may be mistaken for turkey vultures, though they soar with flat wings, while pale-plumed adults may be mistaken for wood storks, though the latter’s long neck and legs make it easy to distinguish from afar. Carnivores, king vultures are. The majority of their sustenance comes from scavenging animal carcasses. Their beak is made to tear meat apart. The smaller vultures will let the king vulture feed first at a cadaver. This is advantageous to the other vultures, as the king vulture is frequently the only animal capable of tearing the hide open. If an Andean condor, which is larger, is present, they will walk away from the food. Vultures of the king are monogamous, and their pair ties endure a lifetime. They are frequently observed perched high in trees or soaring quite far into the sky. The king vulture soars for hours, just flapping its wings once in a while. When in flight, the vulture’s wings are held flat with slightly elevated tips, and from afar, the vulture appears to be headless. Because these birds are solitary, they do not breed in large colonies. They lay their eggs in a stump, the hollow of a rotting log, or a fissure in a tree instead of building nests. A king vulture typically mates for life and deposits a single unmarked white egg in its nest in a tree hollow. The vultures make their nests foul-smelling to scare off prospective predators. Before the egg hatches, both parents incubate it for 52 to 58 days. When chicks hatch, they are completely naked, but they quickly develop pure white down. The parents deliver food to them in their claws, but they also regurgitate food for their chick. The first time a baby flies is at the age of three months. The adult plumage will take 18 months to develop. They usually procreate for the first time when they are four or five years old. Vultures are vital members of the ecology because they clean up rotting carcasses. Although king vultures are not commonly considered endangered, habitat degradation is causing population declines. They will be unable to survive if the woodlands in which they live are destroyed.