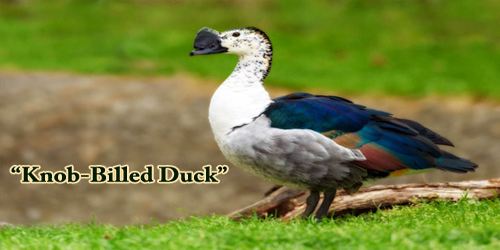 The Knob-billed Ducks (Sarkidiornis melanotos) also known as African Comb Ducks, is a duck from Pakistan to Laos and extreme southern China found in tropical wetlands in sub-Saharan Africa, Madagascar, and southern Asia. They are mostly resident in the wet season, apart from the dispersion. They sometimes perch in trees, and generally are seen in flocks. They form small flocks during the rainy season and can be seen foraging together up to 100 individuals in the dry season. Often they differentiate by gender. Most taxonomic authorities distinguish this group from each other and the comb duck. The apparently extinct “Mauritian comb duck” is based on misidentified remains of the Mauritius sheldgoose (Alopochen mauritiana); this was discovered as early as 1897, but in modern reports, the mistaken identification can still be found occasionally. While they are popular locally, their numbers are decreasing. Nonetheless, this species is not yet considered globally endangered by the IUCN because of its wide range. It is, however, being granted protection under the African-Eurasian Migratory Waterbirds Conservation Agreement. This common species is totally unmistakable. It is one among the biggest species of duck. Length can range from 56 to 76 cm (22 to 30 in), wingspan ranges from 116 to 145 cm (46 to 57 in), and weight from 1.03 to 2.9 kg (2.3 to 6.4 lb). Adults have a white head freckled with dark spots, and a pure white neck and underparts. The upper plumage is glossy blue-black, with a bluish and greenish iridescence, particularly prominent on the black knob on the bill.

The male is larger than the female, and the bill features a broad black knob. Young birds with dull brown upperparts, top of the head and eye stripe are dark buffs below and on the face and neck. Knob-billed ducks are typically larger than the comb ducks, and the flanks are normally lighter (light brown, often whitish in females). They raise during and after the rainy season and do not breed in the tropics if the rain is scanty in still freshwater swamps and lakes. Knob-billed Ducks are nesting mostly in tree holes, and sometimes in high grass. They line their nests but not down with reeds, leaves, or feathers. Males can have two mates in successions at once, or as many as five. They protect the young and the females but not the nest sites. Unmarried males perch in the forest, waiting for formatting opportunities. By grazing or dabbling this duck feeds on grass, and to a lesser degree on small fish, invertebrates, and seeds. Rice farmers can become a concern. Knob-billed ducks sometimes perch at trees. Usually, they are seen in flocks, tiny in the wet season, up to 100 in the dry season. Often, they differentiate by sex. Females lay between 7 and 15 yellowish-white eggs. In a single “dump nest” containing up to 50 eggs, several females can lay.