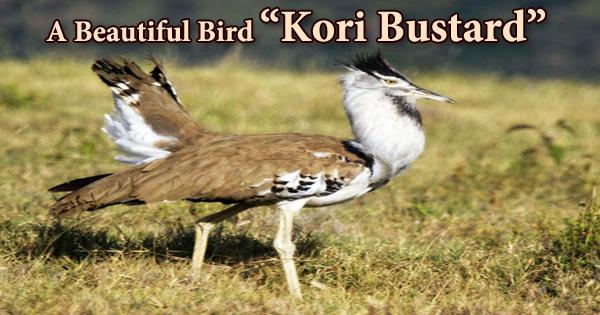 The kori bustard (Ardeotis kori) belongs to the bustard family and is a large, heavy bird with a long neck. It is, without a doubt, Africa’s largest flying creature. Kori bustards prefer dry areas including savannas, grasslands, and semi-deserts. They tend to be near water bodies and areas with light tree cover, where they can get some shade during the day. It is one of four species in the large-bodied genus Ardeotis, which range from Africa to India to Australia. The male kori bustard is thought to be the heaviest living creature capable of flight. Female Kori bustards are half the size of males. The size and crest of the species make it easy to distinguish. Furthermore, unlike other bustard species, these birds lack rufous on the back of their necks. Kori bustards have distinctive grey markings on their underwings that are devoid of white spots as they fly. In Africa, the Kori Bustard has two distinct ranges: one in the southwest near the Horn of Africa and the other in the far south. Ethiopia, Kenya, and Tanzania are all part of the southwestern range. All of Botswana and Namibia, as well as parts of Zimbabwe and South Africa, are part of the far southern range. This species is a ground-dwelling bird and an opportunistic omnivore, like most bustards. Male kori bustards, which can weigh more than twice as much as females, try to breed with as many females as possible before leaving their young. The nest is a small hollow in the ground that is often concealed by nearby obstructive items like trees. Their upper plumage is buff and gray with fine black-barred patterns, allowing them to blend in with their surroundings. Pale buff, white, or solid black underparts are possible. They only have three front toes, all of which are short, wide, and well-suited to running. Males have a more vivid coloration than females.

On the shoulders and both sides of the body, the birds have white markings. The belly is whitish, and there is a crest on the head. The breasts and necks are vermiculated and grey-colored. Creamy plumage, whitish underparts, and dark bands on the flanks, back, neck, and head differentiate this species’ chicks. The dark mantle and shorter head crest differentiate male juveniles from adult males. Male juveniles, on the other hand, are typically taller than adult females. Male Kori bustards weigh between 24-42 pounds (11-19 kilograms), while females are approximately half their size. They stand about 5 feet (1.5 meters) tall. Their feathers contain light-sensitive porphyrins, which give them a pinkish tinge at the base, which is particularly noticeable when they are shed abruptly. The legs are relatively long and the head is wide. The bill is light greenish horn colored, moderately long, straight, and slightly flattened at the base, with a pale-yellow eye. The legs are yellowish. Three toes face forward on the foot. A wing chord of 69.5 to 83 cm (27.4 to 32.7 in), a tail of 35.8–44.7 cm (14.1–17.6 in), a culmen of 9.5 to 12.4 cm (3.7 to 4.9 in), and a tarsus of 20 to 24.7 cm (7.9 to 9.7 in) are the normal male measurements. Meanwhile, the female’s standard measurements are a wing chord of 58.5 to 66.5 cm (23.0 to 26.2 in), a tail of 30.7 to 39.5 cm (12.1 to 15.6 in), a culmen from 7 to 10.4 cm (2.8 to 4.1 in) and a tarsus from 16 to 19.5 cm (6.3 to 7.7 in). Short grass and dry, sandy soil provide the best habitat for this bird. Savannahs, grasslands, and scrublands are all home to Kori bustards. They can also be found in agricultural fields with scattered trees and wheat growth on occasion. They’re also common in agricultural areas, especially wheat fields with a few scattered trees. Since they need a lot of space to take off while flying, they are not found in heavily forested areas. Males perform elaborate displays during the breeding season, including loud booming calls, inflating their esophagus up to four times its normal height, erecting neck feathers, and fanning the tail to reveal their white under-tail coverts. These shows can last several days and can be done individually or in groups. The actual copulation, once a female has selected a male, is brief, lasting just a few seconds. Kori bustards are omnivorous birds, but they are more carnivorous than other bustard species. Insects make up a large part of their diet, particularly for chicks. Tiny rodents, lizards, snakes, seeds, and berries are among the foods they consume. They’ve been seen eating dead animals. In most cases, two eggs are laid, while one or three eggs can be laid on rare occasions. Clutch size is most likely linked to food availability. Their ground color is dark buff, tan, or olive, and they are well-marked and blotched with shades of brown, grey, and pale purple. The height of the egg is 81 to 86 mm (3.2 to 3.4 in) and the width is 58 to 61 mm (2.3 to 2.4 in). They don’t build a nest, instead of laying their eggs in a small shallow scrape in the dirt. The eggs have brown splotches on their shells to help them blend in while they are out in the open. The female will incubate the eggs for about 24 days, and the chicks will have feathers and be able to walk when they hatch. Normally, they are not afraid of humans. The birds, on the other hand, automatically couch or escape when threatened or frightened. Kori bustards have a distinctive sluggish and tentative gait. If they detect an intruder, they silently back away to avoid being heard. Kori bustards tend to run rather than fly since they are large and heavy birds. When moved forward, the bird normally flees, making strong wingbeats in the process.