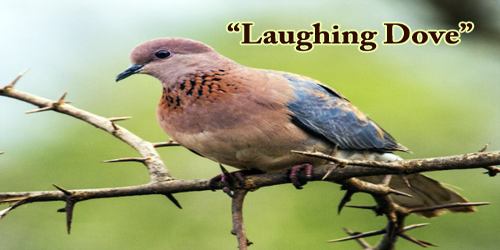 The laughing dove (Spilopelia senegalensis), also known as ‘Senegal Dove’, is a small pigeon that is a resident breeder in Africa, the Middle East, the Indian Subcontinent, and Western Australia where it has found itself in the wilderness around Perth and Fremantle. On its head, the reddish-brown bird has blue markings, a white border on its long tail, purple legs, and a black bill. The copper-tipped feathers at the neck are conspicuous during the courtship’s “bowing display”. The monogamous pair takes charge of two white eggs in a clutch. His call is of a cheerful, bubbly nature, different from most doves’ cooing calls. The nominate subspecies of Laughing Dove was introduced to south-west Western Australia from sub-Sahara Africa within the late 1890s and has become well established in generally urban areas near Perth and surrounding towns. Other sub-species occur within the middle-east and in India. This small long-tailed dove is found in dry scrub and semi-desert habitats where pairs can often be seen feeding on the bottom. A rufous and black checked necklace gives it a distinctive look and is easily distinguished by its call from other doves. Other names include laughing turtle dove, palm dove; while the tiny brown dove is mostly used in India.

The Laughing Doves kill grain, seeds from garden plants and weeds, and bread scraps. The birds typically go after the bottom and might be seen gathered at food sources like spilt grain beside roads. It’s a long-tailed, slim pigeon, typically 25 cm long. Its back, wings, and tail are reddish-brown with blue-grey within the wings. In-flight, the underwings are rich chestnut. The head is pinkish, shading to whitish on the lower belly, and under sections. A black marking exists on the throat. Her legs are red. Youth are more rufous than adults and have decreased shading of the throat. The Laughing Dove is a common and widespread species in scrub, dry farmland, and dwelling over most of its range, being often quite tame. The chuckling call is a low rolling croo-doo-doo-doo-doo with rising and falling amplitude. The species is sometimes seen in pairs or small parties and only rarely in larger groups. Larger groups are developed in arid regions especially when drinking at waterholes. Before heading to the water’s edge, small numbers gather on trees near waterholes, where they are able to suck up water like other members of the pigeon family. This species builds a stick nest during a tree and lays two white eggs. Its flight is quick, with the regular beats and an occasional sharp flick of the wings which are characteristic of pigeons normally. During the day men spend more time incubating the nest. After the second egg is laid, the eggs are incubated, and the eggs hatch after about 13-15 days. Nesting adults can feign injury to distract predators from the nest and keep them away. This species is very seasonal, foraging in grasslands and crops on the fields. They are not particularly gregarious and are usually alone, or in pairs.