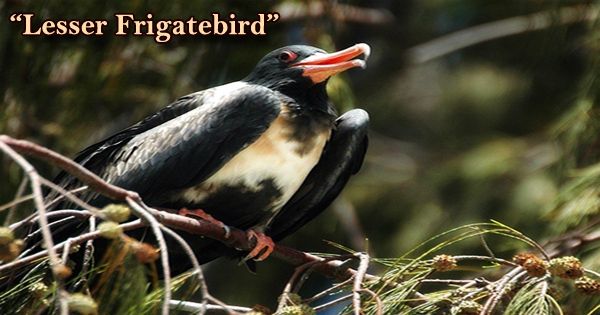 It is said that the lesser frigatebird (Fregata ariel), or Least Frigatebird, is the most common seabird in the Fregatidae frigatebird family. It is the smallest species of frigatebird at about 75 cm (30 in) in length. It occurs in the Indian and Pacific Oceans and off the Atlantic coast of Brazil in tropical and subtropical waters. It is common to breed in tropical season remote islands, including in recent years on Christmas Island in the Indian Ocean. Before the start of a tropical cyclone, these birds are more likely to be seen from the mainland, and once this subsides, they vanish again. The smaller frigatebird is the smallest frigatebird species, with a wingspan of 155-193 cm (61-76 in) and long forked tails measuring 66-81 cm (26-32 in) in length. Male birds are 625 to 875 g (1,378 to 1,929 lb) in weight. Female birds are heavier (1,676–2,105 lb) and weigh 760–955 grams. Like all frigatebirds, on the front of the neck, the male has a broad red sac that is inflated during courtship. A number of calls, bill rattling, and spreading of the wings are also part of the courtship display. The male is mostly all black except for a white patch on the flank that spreads as a spur to the underwing. On the upper wing, males also have a pale bar. With a white collar and breast, as well as a spur running on to the underwing, females have a black head and neck. A small red ring around the eye is also present in the female. 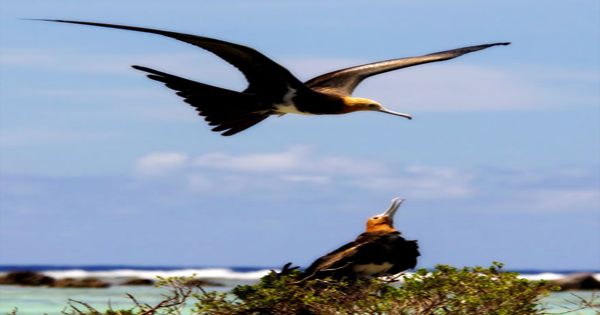 Overall, the juvenile is brown, mostly with white underparts and a tawny head, neck, and chest. From pale-buff to orange or reddish (similar to juvenile Great and Christmas Frigatebirds), the tawny color varies in strength. There is a thick dark collar on the neck and chest of the juvenile plumage, sometimes partial, sometimes full and large on some people, only the lower breast or mid-belly appears white. During the first year, the dark collar appears to vanish, lightening the underparts. They rarely swim and cannot walk, but can climb around the trees and bushes in which they nest. Frigate birds are made for flight. They have very light, narrow skeleton and long wings, and they are masters of the air. In the Australian area, breeding seems to happen between May and December. It is widespread in tropical seas, breeding on remote islands, including in recent years on Christmas Island in the Indian Ocean. Before the start of a tropical cyclone, these birds are more likely to be seen from the mainland, and once this subsides, they vanish again. One egg, which takes 6-7 weeks to hatch, is laid. For another seven weeks or so, fledglings are not left alone for fear that they will be targeted and eaten by other birds, including other frigate birds. The species is listed as of Least Importance by the International Union for Conservation of Nature due to the wide total population and expanded range.