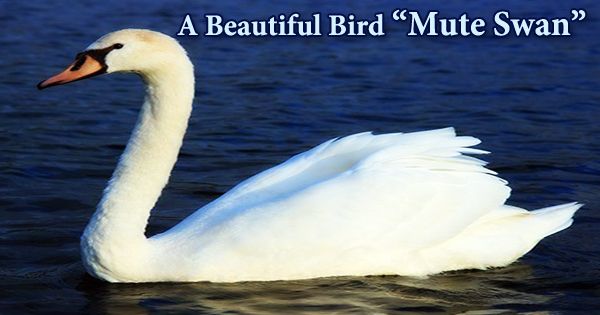 The mute swan (Cygnus olor) is the elegant bird of Russian ballets and European fairy tales. The long neck of this swan is curved into an S as it swims, and its wings are always raised slightly above its back. It is a swan species that belongs to the Anatidae family of waterfowl. It is native to much of Europe, as well as the far north of Africa (as a special winter visitor). Mute swans were brought to the northeastern United States from Western Europe in the late 1800s. The bulk of the introductions took place on Long Island and in New York’s Hudson Valley. Canada, Australia, and Tasmania are among the countries where mute swans have successfully colonized. It has become controversial in some countries, and it is considered a pest in others. Although its voice is hoarse and much quieter than that of our native swans, its wingbeats can be heard from a mile away. The name ‘mute’ comes from the fact that it is quieter than other swan species. This broad swan has a wholly white plumage with an orange beak bordered with black and measures 125 to 170 cm (49 to 67 in) in length. It is distinguished by a prominent knob on top of the beak, which is larger in males. Mute Swans are not native to North America, despite their abundance and familiarity in city parks and bays and lakes in the Pacific Northwest, Great Lakes, Northeast, and Midatlantic. Their ferocious appetites and violent behavior often disrupt local habitats, displacing native species and even posing a threat to humans.

Swans, also known as Mute Swans, are large white-water birds. Their tails are long and wedge-shaped, allowing them to be distinguished from other white swans in Finland. Adult Mute Swans have distinctive orange and black knobbly beaks. Whooper and Bewick’s Swans have yellow and black markings on their beaks. Despite its Eurasian origins, the black swan of Australia and the black-necked swan of South America are its closest relatives, not the other Northern Hemisphere Cygnus swans. There are no living subspecies of this species. Plants, especially waterweed, are a favorite food of mute swans. They usually mate for life, but some may have several partners. A female swan is called a ‘pen,’ whereas a male is called a ‘cob.’ The cob will guard the nest while the pen goes to eat, but will not incubate the eggs. Mute swan subfossils dating back 6,000 years have been discovered in East Anglia’s post-glacial peat fields. They have been found from Ireland east to Portugal and Italy, as well as from France, dating back to 13,000 years ago (Before Present). Mute Swans form strong bonds with their partners. Their monogamy reputation, combined with their elegant white plumage, has made them become a symbol of love in many cultures. The Mute Swan is said to mate for life; however, swans do change mates on occasion, and if their partner dies, they will remate. When a male loses his partner and partners up with a young female, she comes to live on his territory with him. They go to hers if he mates with an older female. When a female loses her partner, she easily remates, usually with a younger male. Due to their scale, color, and grace, mute swans have had an aesthetic appeal for centuries. Adults of this large swan are usually 140 to 160 cm (55 to 63 in) long, but they can be as long as 125 to 170 cm (49 to 67 in) in extreme cases, with a wingspan of 200 to 240 cm (79 to 94 in). Males are larger and have a larger knob on their bill than females. One of the heaviest flying birds is the mute swan. Males (known as cobs) weighed an average of 10.6 to 11.87 kg (23.4 to 26.2 lb), with a weight range of 9.2–14.3 kg (20–32 lb), while females (known as pens) weighed an average of 8.5 to 9.67 kg (18.7 to 21.3 lb), with a weight range of 7.6–10.6 kg (17–23 lb) in many British studies. During the breeding season, the black knob at the base of the male Mute Swan’s bill swells and becomes slightly larger than the females. During the remainder of the year, the gender divide is barely discernible. Males have larger bumps on their beaks than females, but both have a similar look. The young of other white swan species are browner or greyer than cygnets. Instead of being orange, their beaks are pinkish and black. They get their white adult plumage by partially molting after they are born in the summer. Mute swans lay between four and ten eggs, and their eggs are the largest of any Finnish species, measuring around 15 cm in length. The nest is a mound of plant material, typically 5-6′ in diameter, with a shallow depression on top (built by the female, though the male assists in gathering material). They are a status symbol in some European cultures and have been domesticated. Many people enjoy watching swans because they are visible birds that can be fed, photographed, and watched for their various fascinating behaviors. The swans are unafraid of humans, allowing for close observation of wild animals. Swans are sold to be displayed in private lakes. Mute swans have been used to mitigate nuisance problems caused by resident Canadian geese and to monitor filamentous algae in small ponds.