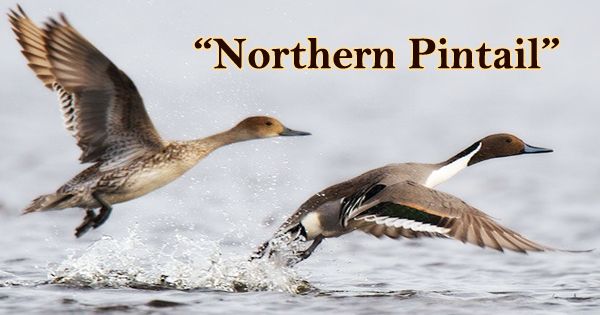 The large duck with a distinctive long-necked slender form is the pintail or northern pintail (Anas acuta). It is a duck that breeds in the northern regions of Europe and in the Palearctic and North America, with a broad geographic range. Pintails are called for their elongated central tail feathers that make up one-fourth of the length of the body of the drake. Due to their quick, streamlined flight on long slender wings, they are referred to as the “greyhounds of the air”. Unusually for a bird with such a wide range, if the probably conspecific duck Eaton’s pintail is treated as a separate species, it has no geographical subspecies. Northern Pintails are cautious, especially when they are highly secretive during their flightless period in late summer. They’re going to forage on land, but they’re going to find much of their food by dabbling in shallow, muddy water. This is a big duck and the long central tail feathers of the male give rise to the English and scientific names of the species. There are blue-green bills for both sexes, and grey legs and feet. A silvery body, accented with white on the sides and breast, and black on the tail and wing feathers, is the drake Northern Pintail. Completing this small elegant bird is a white neck stripe and a rich chestnut head. In muted tans, grays, and browns, the female is camouflaged well. Among the first ducks to migrate south in the fall and north in the spring are the Northern Pintails. The male is 59-76 cm (23-30 in length and weights 450-1,360 g (0.99-3.00 lb) and is thus slightly larger than the female, 51-64 cm (20-25 in length and 454-1,135 g (1.001-2.502 lb) in weight. Males flash a green speculum in flight (the inner wing feathers or secondary feathers) and females flash a bronzy speculum in flight. 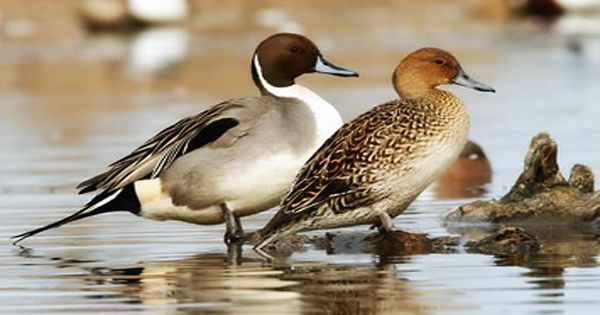 In seasonal wetlands, croplands, grasslands, lush meadows, and short-grass prairies, Northern Pintails nest. In nearby shallow wetlands, streams, and rivers, they forage. They are in wetlands, rivers, streams, bays, tidal marshes, and flooded agricultural fields for the non-breeding season. The Northern Pintails consume seeds and waste grain in fall and winter. Roots and fresh shoots, as well as marine invertebrates, make up the bulk of the diet in spring and summer. The young consume a larger proportion of invertebrates than the adults, as with many other species of duck. The call of the male is a soft proop-proop whistle, similar to that of the common teal, while the female has a descending quack like a mallard, and when flushed, a low croak. Northern Pintails are early-fall migrants beginning in August and begin to arrive on their wintering grounds, although the height of fall migration is in eastern Washington in October and in western Washington in November. Early in the spring, from late February to mid-May, the northward movement begins, peaking in March and early April. Several Pintail flocks migrate to winter in North America from Siberia through the Bering Strait. The female lays seven to nine cream-colored eggs at the rate of one per day; the eggs are 55 mm × 38 mm (2.2 in × 1.5 in) in size and weigh 45 g (1.6 oz), of which 7% is a shell. Pintails were once one of North America’s most prolific ducks, but have experienced a troubling decline since the 1950s. Due to its speed, stamina, and outstanding eating qualities, the northern pintail is a common species for game shooting and is hunted throughout its range. The northern pintail population has suffered from prolonged drought and grassland habitat loss in the Prairie Pothole area, more than any other North American waterfowl species.