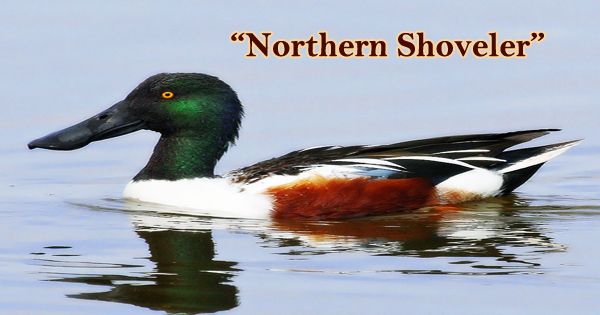 The northern shoveler (/ˈʃʌvələr/; Spatula clypeata), referred to just in Britain as the shoveler, is a medium-sized duck that will in general sit with its back somewhat higher out of the water practically like its bill is pulling its front half down. It breeds in northern territories of Europe and over the Palearctic and across the greater part of North America, wintering in southern Europe, Africa, the Indian subcontinent, Southeast Asia, Central, the Caribbean, and northern South America. There is a shovel-shaped bill for the appropriately called Northern Shoveler that easily sets it apart from other dabbling ducks. It is a rare Australian vagrant. It breeds in North America along the southern edge of Hudson Bay and to the west of this body of water, and west to Colorado, Nevada, and Oregon, as far south as the Great Lakes. There are bright wings, a bright iridescent-green head with a yellow eye, a bold white breast, and chestnut sides of the male in the breeding plumage. In eclipse plumage (from May to August), females, juveniles, and males are mottled brown with orange legs and a green-black iridescent speculum with a blue patch on the forewing. Flocks of shovelers frequently swim alongside their huge bills scarcely lowered before them, stressing food from the sloppy soup of shallow waters. Regardless of their pudgy form, shovelers are acceptable fliers; everywhere social affairs, bunches frequently are seen taking off, circumnavigating the territory over and over, and afterward landing once more. 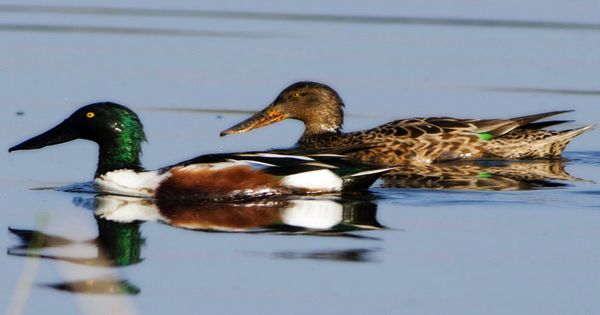 Bold white, blue, gray, and rust are the breeding male shovelers, but their most prominent characteristic is their white chest and white lower sides. Males flash blue on the upper wing during takeoff, and green on the secondary wings (the speculum). In brown, female and immature shovelers are mottled and have powdery-blue on the wings that are often noticeable on sleeping birds. Their orange bill, very wide, is their most prominent field mark. They are 48 cm (19 in) long with a weight of 600 g (1.3 lb) and have a wingspan of 76 cm (30 in). Dabbling for plant food, Northern shovelers feed, often by swinging their bill from side to side and using the bill to strain food from the water. At low elevations, these species occupy shallow, marshy ponds and wetlands. Rearing territory is in the open nation (grassland or tundra), or marsh forests and clearings, consistently close to shallow water. During winter and movement, they will utilize essentially any wetland as long as it has sloppy edges. Shovelers will rummage in sewage lakes and stale or dirtied waters dodged by different types of ducks. Female forms the home, a shallow despondency made of grass and weeds, fixed with down, and broods the 9 to 12 eggs for 23 to 28 days without anyone else. The female leads the young to the water a few hours after they hatch, where they can swim and forage instantly. Usually, the young remain close to the cover of growing foliage, and before they escape at 52 to 66 days of age, the female tends them. It’s a pretty quiet species. The male has a clunking call, while there is a Mallard-like quack for the female. The male is longer with the female than in most ducks, often for part of the incubation period.