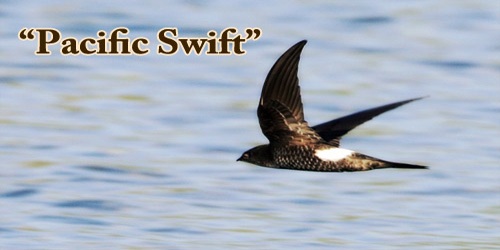 A small bird, which is part of the Swift family, is the Pacific swift (Apus pacificus), or Fork-tailed swift. It raises in eastern Asia. It is highly migratory, spending winter in South East Asia and Australia on the northern hemisphere. However, it is entirely unrelated to these passerine species, as swifts are in the class Apodiformes. The similarities between the groups are due to convergent evolution which indicates similar lifestyles. The general shape and blackish plumage recall its relative, the common swift from which a white rump band and strongly marked underparts distinguish it. At 17–18 cm (6.7–7.1 in) long, the Pacific swift is that the largest of the Apus swifts. It’s a 43-to-54-cm (17-to-21-in) wingspan. Females are slightly heavier than males, averaging 44.5 g (1.57 oz) against 42.5 g (1.50 oz). In general, it is similar to the common swift though it is slightly longer-winged and has a more protruding head. The tail fork is smaller, and the rump is wider. Apart from a white rump band, the upper parts are black and a much greyer head. The underparts are black, while white fringes to the feathers offer a scaly look to the belly when viewed from below. The tail and the upper wings are black, with brown underwings. The eyes are brown and the bill is black, and the legs are very short. These species are found in a very wide selection of climatic zones and habitats. It breeds in sheltered locations like caves, natural rock crevices, or under the roofs of homes. The nest could be a half-cup of dry grass and other fine material that’s gathered on the wing cemented with saliva and attached to a surface. 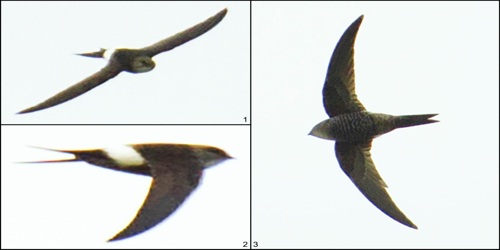 These birds have very short legs which can only be used to stick to vertical surfaces. The scientific name derives from the Greek, apous, which means “without feet.” They never settle on-the-ground willingly. Pacific Swifts spend most of their time in the air, feeding on insects in their beaks that they capture. The sexes are plumaged identically, and juveniles only differ from the adults in that the feathers show pale fringes, particularly on the wings. The subspecies to the south, A. P. kurodae, have a narrower white rump (15 mm/0.6 in against 20 mm/0.8 in nominate form), a grey throat and a blacker bottom. The two or three white eggs are incubated for about seventeen days to hatching. Subsequently, the chicks have an extended but variable period within the nest before they’re fully-fledged. When the fogeys cannot find sufficient food in the weather, the young can survive for days without being fed by metabolizing body fat. Pacific Swifts are similar in size to Common Swift and, except for a white rump, they are black. The deeper tail fork, broader legs, bigger head, and wider white throat patch distinguish them from a partially leuctical Common Swift. Typical swift screams are the calls provided by flocks near the breeding areas, like a trilled tsiririri or more harsh spee-eer. They resemble the cries of the common swift but are softer and fewer wheezy. All swifts kill insects caught on the wing, and therefore the Pacific swift has been recorded as consuming bees, wasps, termites, moths, and flies. Pacific swifts on the wintering grounds are less vocal but they produce a range of twitters and buzzes. Swift is going back year after year to the same location, restoring his nest when necessary.