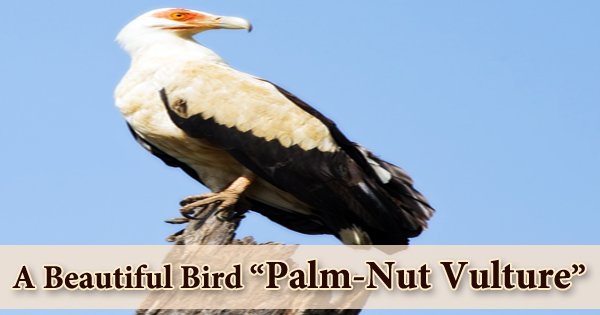 The palm-nut vulture (Gypohierax angolensis) also known as the vulturine fish eagle, is a large bird of prey that belongs to the Accipitridae family, which also includes kites, buzzards, harriers, vultures, and eagles. The genus Gypohierax has only one member. This bird is a vulture from the Old World (only distantly related to the New World vultures, which are in a separate family, the Cathartidae). It breeds in forest and savannah throughout Sub-Saharan Africa, typically near water, and has a range that overlaps with the Oil Palm. It feeds primarily on the fruit of the oil palm, but it also eats crabs, mollusks, locusts, fish, and has been known to harass domestic poultry on occasion. Like many African vultures, it is very approachable and can be seen close to human habitation, even on large hotel lawns in tourist areas of countries like The Gambia. As an adult, this bird is almost unmistakable. This is the smallest Old-World vulture, weighing 1.3–1.7 kg (2.9–3.7 lb), measuring 60 cm (2.0 ft) long and 150 cm (4.9 ft) around the wings. It has all-white plumage with the exception of black patches on its wings and tail. Each eye has a red patch around it. The juvenile is brown with yellow eye patches and matures in 3–4 years. This species flies more like an eagle than a traditional vulture, and it can maintain flapping flight without relying on thermals. This vulture gets its name from its preferred meal, which, unlike other vultures, is not meat, but rather the Raphia and Elaeis palm fruit nuts. When eating palm fruit, they hang upside down below the fruit, use their beaks to take the palm nut from the tree, and then eat it with their paws. Invertebrates (insects), fish, and carrion are also on their menu.

The adult Palm-nut vulture can be mistaken for both the African fish-eagle and the Egyptian vulture due to its extensive white plumage and black wing- and tail-feathers, but it lacks the chestnut body of the former and the whitetail of the latter. The male and female are physically similar, with the female being the same size as the male. Juveniles, on the other hand, are mostly brown with partly black wings, and it takes three or four years for them to mature into adult plumage. The species is not endangered, but habitat loss threatens it, especially in West Africa. This is mitigated in part by the expansion of oil palm plantations in the region, which provide food but have restricted nesting opportunities due to harvesting disturbance. The expansion of palm plantations in Angola and Zululand is responsible for range expansion. Palm-nut vultures can be found in most of the African continent’s coastal regions, from The Gambia to Kenya, and as far south as South Africa. A total of 80 000 pairs of Africans are known to exist. In South Africa, there are about 40 different species of birds. As a result, it is most widespread below 1,500 m (4,900 ft) in coastal forests and mangrove swamps, but it can also be found in wet savannas. Pairs soar together in an aerial show of rolling and jumping, far more acrobatic than most vultures, at the start of the breeding season. A single white and brown egg is laid during each breeding cycle, which is incubated by both sexes for four to six weeks. The young brown chicks will typically fledge 85 to 90 days after hatching. This species is found throughout most of Africa, is relatively common, and has a stable population. In South Africa, it is much rarer and much more scattered, but it is not considered to be in any immediate danger there. There are no current conservation efforts for this species since it is the only vulture species in South Africa with a growing population. The benefit of preserving this is that the South African satellite population produces dispersing birds that help to keep the Mozambique population alive.