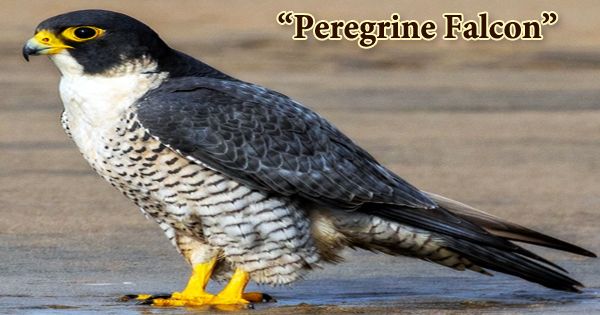 The peregrine falcon (Falco peregrinus), also known as the duck hawk, is the world’s most widely distributed bird of prey, with breeding populations on all continents except Antarctica and several oceanic islands. It is a widespread raptor (bird of prey) in the Falconidae family. These falcons are fearsome predators that hunt other birds (and bats) in mid-flight. Peregrines search from above and plunge into a steep, fast dive that can reach 200 miles per hour once they spot their prey. The fastest measured speed of a peregrine falcon is 389 km/h, according to a National Geographic TV program (242 mph). Peregrine falcons are sexually dimorphic, as are most bird-eating raptors, with females being significantly larger than males. One of the noblest and most spectacular of all birds of prey, according to falconers and biologists alike. The Peregrine Falcon, despite being present on six continents, is rare in most areas; it was critically endangered in the mid-twentieth century due to the effects of DDT and other persistent pesticides. The breeding range of the peregrine falcon covers land areas ranging from the Arctic tundra to the tropics. It can be found almost anywhere on Earth, with the exception of extreme polar regions, very high mountains, and most tropical rainforests; New Zealand is the only large ice-free landmass where it is absolutely absent. This makes it the most widely distributed raptor in the world, as well as one of the most widely distributed bird species. With long, pointed wings and a long tail, Peregrine Falcons are the largest falcon in much of the continent. Long primary feathers give the Peregrine a long-winged appearance, so look at shape as well as height. Males are smaller than females in most raptors, so Peregrines could be mistaken for large female Merlins or small male Gyrfalcons. They prefer open areas and thrive near coasts where shorebirds are abundant, but they can be found anywhere from tundra to deserts. Also, in major cities, peregrines have been found living on bridges and skyscrapers. In much of its range, the peregrine falcon is a highly effective example of urban wildlife, taking advantage of tall buildings as nesting sites and an abundance of prey including pigeons and ducks. This species’ English and scientific names both mean “wandering falcon,” referring to many northern populations’ migratory habits.

The upper portion of the bird is bluish-gray, with black bars on the white to the yellowish-white underside. Peregrines are about 36 to 49 cm (14.2 to 19.3 inches) long as adults. They hunt by flying high and diving at their prey. They are strong and fast. They hit with clenched talons and kill by impact, reaching speeds of over 320 km (200 miles) per hour. Males weigh between 330 and 1,000 g (0.73–2.20 lb), while females weigh between 700 and 1,500 g (1.5–3.3 lb). Males weigh less than 700 g (1.5 lb) and females weigh more than 800 g (1.8 lb) in most subspecies, with females weighing up to 50% more than their male breeding partners. The wing chord measures 26.5–39 cm (10.4–15.4 in), the tail measures 13–19 cm (5.1–7.5 in), and the tarsus measures 4.5–5.6 cm (1.8–2.2 in) in normal linear measurements of peregrines. Ducks, as well as a number of songbirds and shorebirds, are among their prey. Peregrines prefer to live in rocky open country near water, where there are plenty of birds. The standard nest is a scrape on a cliff ledge, but some populations use city skyscrapers or tree nests constructed by other birds. Incubation takes about a month and the clutch consists of three or four reddish-brown eggs. In five to six weeks, the young fledge. Peregrine Falcons use stoops, or rapid, dramatic dives, to capture medium-sized birds in the air. In cities, they are masterful at catching pigeons. They prey on shorebirds and ducks in other areas. They sometimes perch on high ledges, waiting for the right moment to unleash an aerial attack. Outside of the nesting season, these birds can travel widely; their name means “wanderer.” Many people migrate, even though some are permanent residents. Many who breed on the Arctic tundra and spend the winter in South America travel up to 15,500 miles per year. They do, however, have an amazing homing instinct that takes them back to their favorite aeries. Some falcon breeding sites have been occupied by successive generations of falcons for hundreds of years. Peregrines are found across North America, although they are more common along the coasts. An analysis of the flight physics of an “ideal falcon” discovered a theoretical low-altitude speed limit of 400 km/h (250 mph) and a high-altitude speed limit of 625 km/h (388 mph). Peregrine falcons can live up to 19 years and 9 months in the wild. In children, mortality is 59–70% in the first year, decreasing to 25–32 percent in adults. Peregrine Falcons are primarily bird hunters, eating starlings, pigeons, blackbirds, jays, shorebirds, and waterfowl. They also hunt mammals, reptiles, and insects on occasion, and some Peregrine Falcons have been recorded to specialize in bats. About 1,500 and 2,000 bird species (roughly a fifth of the world’s bird species) are thought to be predated by these falcons somewhere on the planet. During the mid-twentieth century, peregrine falcon numbers plummeted, and the magnificent falcons became an endangered species in the United States. Peregrine Falcons, like other falcons, do not build their own nests. They lay their eggs in scrapes, which are small depressions in the soil or gravel of a cliff ledge. They sometimes use discarded stick nests constructed in trees by other animals. The female lays three or four eggs, sometimes five, which take 34 days to incubate. The sport of falconry has long used captive peregrine falcons. After WWII, the peregrine falcon’s population plummeted across most of its global range. Since the use of DDT and other chemical pesticides was banned, the birds have thrived. Captive breeding programs in the United States and Canada have also assisted in growing the bird population. In certain parts of the world, there might even be more peregrines than there were before the twentieth-century decline.