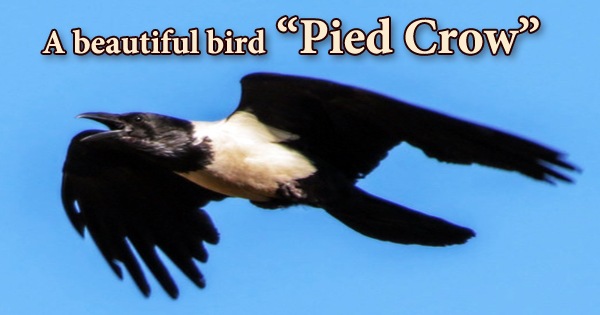 The pied crow (Corvus albus) may be found in most parts of Africa, and it thrives in South Africa. Because it can hybridize with the Somali crow (dwarf raven) when their ranges intersect in the Horn of Africa, the pied crow is better thought of as a tiny crow-sized raven. These crows are extremely clever and opportunistic, and they share the jackdaw’s fondness for bright objects. They also have unique flying skills, having wide wings that let them to soar at tremendous speeds. They are inquisitive, excellent imitators, and tool users. Its behavior, on the other hand, is more characteristic of Eurasian carrion crows, and it might be a recent connection (together with the Somali crow) between Eurasian crows and common ravens. Pied crows can be found in Sub-Saharan Africa, from the Cape of Good Hope to Madagascar, the Comoros Islands, Zanzibar, Aldabra, Pemba, and Fernando Po. They prefer an open country with villages and towns nearby. The tropical rainforest is not home to this species. It is about the same size as or slightly larger than the European carrion crow (46–50 cm in length), but with a correspondingly larger beak, slightly longer tail and wings, and longer legs. Its glossy black head and neck are broken by a wide expanse of white feathering from the shoulders to the lower breast, as the name indicates. The tail, bill, and wings are black too. The eyes are dark brown. Immature birds’ white plumage is sometimes blended with black. It looks similar to white-necked and thick-billed ravens, but its beak is considerably smaller. Pied crows are gregarious birds which forage in couples or small groups, but they may congregate in huge flocks when food is plentiful. They sleep in big trees in metropolitan parks in communal roosts with hundreds of other birds. This species is notorious for swarming larger birds, ranging from small vultures to huge vultures. It’s possible that it’ll be surrounded by smaller birds. For food, it will even kidnap seabirds. Within its vast range, this species is mostly stationary. Depending on the range, certain seasonal or local migrations occur. After mating, movements have been observed: adults are likely stationery, while the young migrate to new areas. The pied crow, like many other crows, makes a guttural “kraaak” sound, as well as a brief “krow” or a deeper “rrawrr.” It also creates a “tarrrrrh” or “torrrrh” sound when shaken dry. Other noises include nasal, throaty, hollow, and flat tones, with head bobbing and tail motions occurring often. Its distribution overlaps with that of the white-necked raven in southern Africa. In comparison to the black breast and belly of the bigger white-necked raven, which also has a white tipped and weightier beak, the pied crow is somewhat smaller and has a black, more delicate beak. It dwarfs the black crow in size.

Pied crows are omnivores, eating a wide variety of invertebrates such as insects, spiders, and mollusks, as well as small vertebrates such as rodents, birds, and their eggs, lizards, frogs, and fish. Small birds and bats can be caught in the act of flying. These birds also patrol for roadside dead and scavenge at garbage dumps. They consume seeds, roots, fruits, dates, oil palm nuts, grains, and potatoes, among other plant materials. Crows have exceptional memory and can conceal food in several caches, relocate it multiple times, and remember where it is at all times. A crow, with the exception of some parrots, has the largest brain of any bird for its size. The brain-to-body ratio is similar to that of chimps and not dissimilar to that of humans. Pied Crows prefer open woods and forested scrub, although they may be found near towns, cities, and farms as well.  They do not occur in the rainforests or deserts. It is rarely observed far from human settlement, however, it is not as closely associated with urban life as Asia’s house crow (Corvus splendens) and may be seen far from human civilization in Eritrea. Crows are naturally sociable creatures who form strong bonds with their masters and may even learn to listen to simple orders. Despite their boldness, Pied Crows have a sensitive temperament that is quickly strained by their owners’ thoughtless actions. The Pied Crow has a wide range and may be common in the local areas. It is presently unaffected. The nest is generally constructed in large, solitary trees, however, smaller examples are occasionally utilized, depending on availability. Telephone pole cross supports are also commonly utilized, and both sexes construct the nest. From September to November (depending on latitude), a clutch of 3–6 eggs is produced, which are pale green with brown spots. When the incubating female leaves the nest, the eggs are usually covered. The offspring are generally fledged by 45 days after 18–19 days of incubation. The young are reared by both sexes. The Pied crow is widespread and common across its range, according to the IUCN, although no population estimate is known. This species is now categorized as Least Concern (LC), and its populations are steady. Pied Crows are big and energetic birds that require a lot of room to fly. Commercial bird cages, even ones meant for the largest macaws, are far too tiny for them to adjust to. A pet Pied Crow may only be kept in a custom-built or commercial outdoor aviary or a properly-equipped indoor space. Pied crows are significant in both good and bad ways. They can harm gardens and agricultural crops due to their diverse diet. On the plus side, they eat carrion, which benefits not just people but also the ecology in which they dwell.