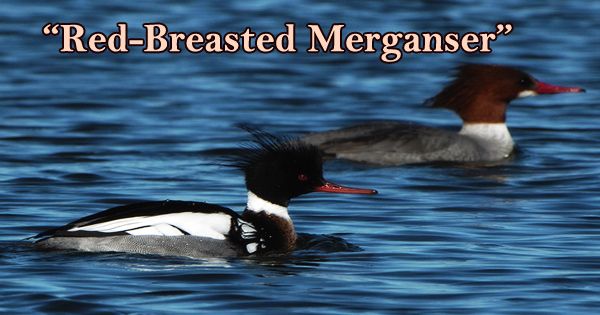 A sleek, crested, fish-eating duck, typically seen around jetties and piers along the coast, is the red-breasted merganser (Mergus serrator). It’s a duck for swimming, one of the sawbills. This species is superficially very similar to the Common Merganser. The name of the genus is a Latin word used to refer to an unspecified waterbird by Pliny and other Roman writers, and serrator is a sawyer from the Latin serra, “saw.” The small head, slender neck, and tapered body of the red-breasted merganser give it a sleek look in the air. A striking, broadband of white is displayed by the male that spans almost the entire length of the body and a dark band across the chest. Unlike the smooth head of the common merganser, the dark green head appears black at a distance and is tufted at the back. The deep red eyes and feet of the male red-breasted merganser. The back is black, and the rump is gray-brown with fine bars of black. The white sides and flanks have wavy black bar lines, providing a distinct contrast with the white belly. With a 70-86 cm (28-34 in) wingspan, the adult red-breast merganser is 51-62 cm (20-24 in) long. The weight of red-breasted merganser ranges from 800-1350 g (28.2-47.6 oz). With a brownish chin, a dingy breast, and a brown shaggy head, the female and nonbreeding males are brownish-gray overall. Both sexes have a prominent white lower wing panel in flight. They have ash-gray shoulders and a small white patch with a black base on the speculum formed by the internal white secondaries. Dusky brown is the primaries and their covers. Female red-breasted mergansers greatly resemble common mergansers, except for their smaller scale. 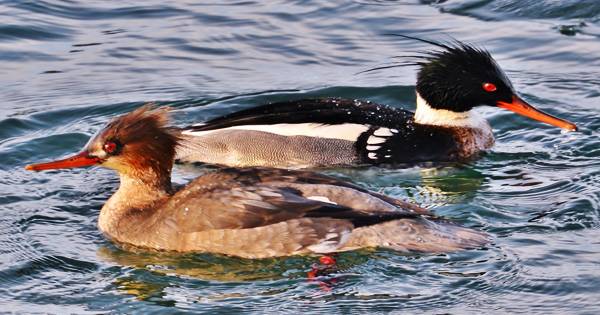 The Red-breasted Merganser, however, nests farther north, winters mostly on saltwater, and nests mostly on the ground, while the common winters mostly on freshwater and cavity nests. Mergansers, red-breasted, appear to sit low in the water and fly at an angle above their feet with their heads. They swim with a partly submerged head, diving underwater with their serrated bill to catch small fish. There are long, narrow bills with serrated edges in both males and females, which are bright red in the male and duller in the female. Red-breasted merganser that attained a top airspeed of 100 mph while being chased by an airplane was the fastest duck ever recorded. The previous speed record set by a canvasback clocked at 72 mph eclipsed this. Red-breasted mergansers nest on the ground in highly diversified locations, unlike common and hooded mergansers, which usually nest in tree cavities. They were discovered breeding in marshes, on rocky islets, in large lakes on vegetated islands, in bank recesses, and under driftwood piles. In the nests of other ducks, hens lay eggs and vice versa. North American nests hold 5-11 eggs on average. A woman leads young people to water, where they feed themselves, within a day after the eggs hatch. 2 or more broods, tended by 1 or more adult females, may enter, but young women are left within a few weeks on their own. The young are able to fly about 2 months after hatching. They consume small fish primarily, but also aquatic insects, crustaceans, and frogs as well. One of the species protected by the Agreement on the Conservation of African-Eurasian Migratory Waterbirds (AEWA) is the red-breasted merganser.