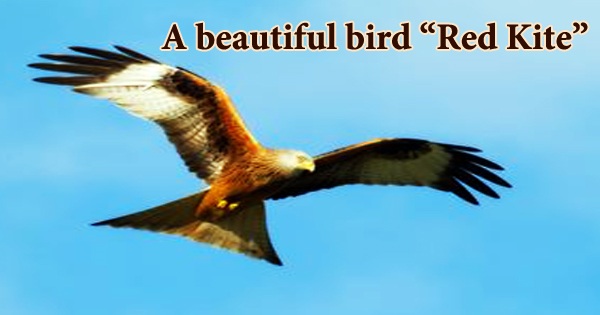 The red kite (Milvus milvus) is a beautiful medium-sized bird of prey belonging to the Accipitridae family. It is a member of the diurnal raptor family, which includes eagles, buzzards, and harriers. With its reddish-brown body, angled wings, and highly forked tail, this stunningly elegant bird of prey is unmistakable. Currently, the species breeds in Europe’s Western Palearctic area and northwest Africa, however, it was once found in northern Iran. Birds from northeastern and central Europe winter further south and west, reaching as far as Turkey, in the warmer regions of its range in western Europe and northwest Africa. Vagrants have made their way as far north as Finland and as far south as Israel, Libya, and Gambia. This graceful bird soars on large dihedral wings and a long forked tail that twists as it changes direction. Rusty on the body, upper tail, and wing coverts. The black wingtips and dark secondary flight feathers contrast with the white main flight feathers. Males and females are nearly identical in color, although youngsters have buff breasts and belly. Because to human activity, red kites became extinct in England by the end of the nineteenth century. They were slaughtered because they were thought to be attacking lambs and gamebirds (e.g. pheasants). They do not represent a hazard to sheep or game farms, however, they will consume dead lambs and pheasants. In Wales, a few couples have survived. The binomial name Falco milvus was given to the red kite by Swedish naturalist Carl Linnaeus in the 10th edition of his Systema Naturae in 1758. The bird was given the Latin name milvus. Bernard Germain de Lacépède, a French scientist, transferred the species to the genus Milvus in 1799, resulting in the tautonym. A plan to reintroduce the red kite to England and Scotland was launched in 1989. Chicks from Spain and Sweden were released at properly protected locations and permitted to fly free between 1989 and 1993. From Spain and Portugal east through central Europe and Ukraine, north to southern Sweden, Latvia, and the United Kingdom, and south to southern Italy, red kites breed. In northern Morocco, there is a population. The warmer areas of their range in western Europe and northwest Africa are home to red kites. During the winter, northern birds migrate south, primarily to the west of their breeding area, but also to eastern Turkey, northern Tunisia, and Algeria. Red kites may be found in broadleaf forests with heathland and pasture, valleys, thickets with adjacent grasslands, and wetland borders, among other places. These birds may be found in both rural and urban areas.

Kites like mountainous terrain where there is a mix of forest and open grassland. The Chilterns, with its undulating hills, woods, chalk downland, and diverse agriculture, provide perfect nesting and feeding habitat for birds. Many local farmers are working to improve animal habitat by managing their property. Males weigh 800–1,200 g (28–42 oz), while females weigh 1,000–1,300 g (35–46 oz). Red kites are 60–70 cm (24–28 in) tall with a 175–179 cm (69–70 in) wingspan; males weigh 800–1,200 g (28–42 oz), and females 1,000–1,300 g (35–46 oz). It’s a graceful bird with large dihedral wings and a long forked tail that twists when it changes direction. Rusty on the body, upper tail, and wing coverts. The black wing tips and dark secondary flight feathers contrast with the white main flight feathers. The sexes are identical except for the weight difference, and youngsters have a buff breast and belly. It makes a thin piping sound that is comparable to but not as mewling as a common buzzard’s. In the Welsh population, there is a rare white leucistic form that accounts for around 1% of hatchlings, although this variation imparts a survival disadvantage. The red kite is a nocturnal bird. They are generally observed alone or in couples, although during migration they may roost in small groups or form small flocks. These raptors love to hunt in open places while flying low to the ground. They will also hunt while perched on a perch for long periods of time, waiting for prey to pass by. When the kite sees the prey, it dives bombs to capture it with its talons. Red kites are mostly silent, but when they’re aroused, they’ll emit a high-pitched “kiou-ki-ki-ki’ or ‘rriu-rri-rri” sound. On the wings of many Red Kites observed in Ireland are colored plastic identification tags. Because they are too weak-footed to kill anything larger than a tiny rabbit, red kites consume mostly dead animals that they can find (carrion). Chicks, small animals, and invertebrates like beetles and earthworms are also on their menu. Red kites are monogamous, meaning they only have one partner for the rest of their lives. They breed from March to May. The nest is generally built in a fork of a big hardwood tree between 12 and 15 meters (39 and 49 feet) above ground level. Grass and sheep’s wool are occasionally used to line the nest. The female usually lays 1 to 3 eggs, although 4 and even 5 eggs have been observed on rare occasions. The eggs have white ground with red-brown dots and are non-glossy. The young are ready to fly after 48-50 days but still, stay with their parents for a further 7-10 days. Poisoning, both direct and indirect, from pesticides (especially in the wintering areas of France and Spain), and changes in agricultural practices resulting in a loss in food supplies are the primary risks to Red kites. Electrocution, hunting and trapping, deforestation, egg collecting, and potentially competition with the more successful Black kite are all dangers.