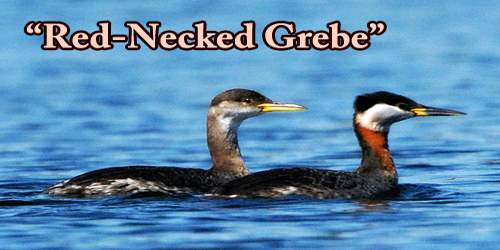 The red-necked grebe (Podiceps grisegena) is a thick-set waterbird, similar in size to many ducks but with a longer neck and a heavy, pointy tail. It is a migratory aquatic bird found in northern hemisphere temperate regions. Nearly as extensive as a Mallard; transitional between Horned Grebe and Western Grebe. Its wintering territory is generally limited to quiet waters just past the waves around sea coasts, albeit a few feathered creatures may winter on enormous lakes. Grebes favor shallow assortments of new water, for example, lakes, swamps, or fish-lakes as reproducing destinations. Nonbreeding birds with light cheeks and neck sides are often dark gray above, paler below. Breeding adults have a rusty red breast and foredeck, with a sensible black cap and sharply defined white cheek. Immatures are kind of like nonbreeding adults but the head pattern is a smaller amount distinct. Colorful, noisy, and noticeable on its nesting grounds, a solitary bird of offshore waters tends to be a different bird in winter when it is gray and quiet. In the takeoff very slow, and not always seen flying except in the migration. In winter, the red-necked grebe is a dusky-grey nondescript species. During the breeding season, it obtains the unmistakable red neck plumage, dark top, and differentiating pale dim face from which its name was inferred. It likewise has a detailed romance presentation and an assortment of boisterous mating calls. When matched, it manufactures a home from water plants on the head of drifting vegetation in a shallow lake or swamp.

The red-necked grebe has been described in his Histoire Naturelle des Oiseaux by the French polymath Georges-Louis Leclerc, Comte de Buffon in 1781. Generally quiet in the nonbreeding season, and either individually or in small, loose groups. Pairs conduct complex, noisy courtship rituals throughout the nesting season, and actively defend territories, even against other waterfowl species. In eastern Asia, red-necked grebes breed during a large region that covers most of eastern Siberia and also the surrounding area. Eastern Asian populations winter along the seashore of Asia and in some large inland lakes within the region. The adult of the nominate European subspecies is 40–50 cm (16–20 in) long with a 77–85 cm (30–33 in) average wingspan and weighs 692–925 g (24.4–32.6 oz). Inbreeding plumage, it has a dark top that stretches out underneath the eye, extremely pale dim cheeks and throat, a corroded red neck, dim back and flanks, and white underparts. The eyes are dim earthy colored and since quite a while ago, the pointed bill is dark with a yellow base. Like all grebes, this species has lobbed feet which they use as effective swimming paddles and flying rudders. It also compresses their legs laterally, making them more flexible when moving through water. The seasonal diet varies. Can feed mainly on small fish in winter on coastal waters; in summer, feed mainly on insects on marshes and ponds. They do consume crustaceans, mollusks, tadpoles, nereid worms, but little plant matter. Can eat feathers like other grebes. The red-necked grebe lays four or five (range one to nine) dull white or pale blue eggs, which average 3.4 cm (1.3 in) in breadth, 5.1 cm (2.0 in) in length and weigh about 30.5 g (1.08 oz), of which 10% is the shell. Young can swim soon after incubating; are taken care of by the two guardians, and may ride on guardians’ backs. Age from the start flight not notable might be 10 weeks now and again. Typically 1 brood for every year, seldom 2. Red-necked grebes endeavor to sidestep flying creatures of prey by plunging; when taking care of, jumps normal less than 30 seconds, in spite of the fact that getaway plunges are more drawn out. Human contamination is additionally affecting red-necked grebe populaces.