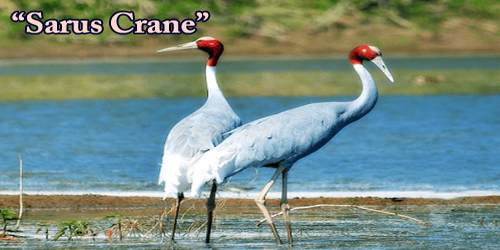 The sarus crane (Antigone antigone) is a large non-migratory crane, living in Southeast Asia, northern India, and northern Australia. These birds are usually seen in small groups of 2-5 and they forage in shallow water or fields while walking, often probing with their long bills. A conspicuous species of open wetlands in South Asia seasonally flooded Dipterocarp forests in Southeast Asia, and Eucalyptus-dominated woodlands and grasslands in Australia are the tallest of the flying birds, standing at a height of up to 1.8 m (5 ft 11 in). Three populations are currently recognized, everyone occupying a definite range. The Indian sarus crane lives in northern and central India, Pakistan, and Nepal. The Eastern Sarus crane wont to live throughout the geographic region but now’s confined to Vietnam and Cambodia, with a little population in Myanmar. The Australian Sarus crane lives in northern Australia. This is a very large crane with an average length of 156 cm which is found in marshes and plains of freshwater. Adults are gray with a bare red head and a white crown and a long bill of dark spottedness. The long neck is held straight in flight, unlike herons, and the tips of the black wing can be seen; the long red or pink legs trail behind them. The weight of individuals nominated for the race is 6.8–7.8 kg (15–17 lb), while five adult A. a. averaging 8.4 kg (19 lb) of sharpii. The weight can vary from 5 to 12 kg (11 to 26 lb), from 115 to 167 cm (45 to 66 in) in height, and from 220 to 250 cm (87 to 98 in) in wingspan throughout the distribution range. Males and females look similar, but duller and browner are young birds. 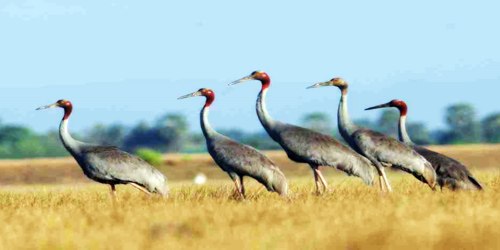 These cranes live mainly in wetlands like canals, marshes, and ponds, sometimes near humans. They inhabit cultivated areas too and high-altitude wetlands. Breeding is further inland, but always in an exceedingly wet area. The Sarus crane appears in shallow wetlands, wet grasslands, or rice fields during the dry season. On the land, it nests, laying two or three eggs in a bulky nest. The Sarus Crane does not, unlike many cranes that carry out long migrations. Both the male and the female, sitting on the nest, take turns and the male is the main protector. Sarus cranes are omnivorous and consume a wide variety of foodstuffs, such as aquatic plants such as sedge tubers, seeds, rice, and other grains, crustaceans, snails, grasshoppers, amphibians, reptiles, small vertebrates, and fish. In shallow water, they roost, where they may be protected from certain ground predators. Adult birds don’t molt their feathers annually but feathers are replaced about once every two to a few years. Females usually lay two eggs, occasionally three, and incubation lasts for around 31 to 34 days and is principally done by the feminine, while the male defends the location of the nest. Chicks will follow the adults from their day of hatching, and they fly from hatching for 85 to 100 days before they will make their first flight. In Malaysia and the Philippines, that species have been extirpated. In Thailand, reintroduction projects have made use of Cambodian birds. Relevant estimates for this species also exist in these regions: India, Nepal, and Pakistan-8,000-10,000 cranes; Cambodia, Laos, and Vietnam-800-1,000 cranes; Myanmar-500-800 cranes and 10,000 breeding adults in Australia. Overall, Sarus crane numbers are decreasing today, and that they are classified as vulnerable (VU) on the list of threatened species.