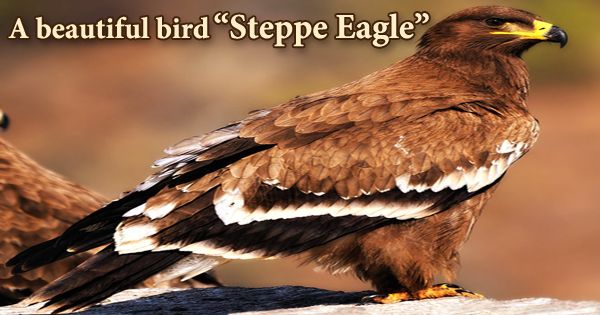 Steppe Eagle (Aquila nipalensis) is a huge eagle with broad, long wings and a short, rounded tail; brown is the color of adult birds. It is a member of the Accipitridae family, which includes all eagles. The well-feathered legs of the steppe eagle indicate that it belongs to the Aquilinae subfamily, sometimes known as “booted eagles.” The rufous patches present on the nape and neck of adults, as well as the huge gape, distinguish the Steppe Eagle from several other eagle species. The non-migratory tawny eagle (Aquila rapax) was long thought to be closely related to this species, and the two forms were previously treated as conspecific. They were separated due to strong morphological and anatomical differences; two genetic investigations, each based on a small number of genes, show that the species are distinct but disagree on how closely they are related. The undersides of the wings are either the same color as the wing coverts and belly, or they are darker and barred. The top tail covers have a white patch. The nape features a rusty-colored or ochre patch that varies greatly in size amongst birds. The underside of the wing bears a short white band generated by the wide lower wing-coverts in juveniles and immature birds (the so-called “juvenile” band), which helps to distinguish Steppe Eagles of this age from other eagles species. Within its European distribution, this species has experienced dramatic population decreases. The majority of its range is outside of Europe, where it was not deemed to be diminishing at a fast enough rate to meet the Vulnerable criteria. Recent data suggest, however, that the population outside of Europe is facing larger dangers than previously anticipated, and that it has also experienced rapid recent losses across much of the range. The steppe eagle migrates in large numbers across almost its entire breeding territory, passing through key migration flyways such as the Middle East, Red Sea, and the Himalayas. The steppe eagle is notable for its sluggish and nearly passive eating ecology in the winter, focused on insect swarms, landfills, carrion, and the semi-altricial young of various animals, but missing the assertive and predatory temperament of its cousin species. Although thousands of steppe eagles can still be spotted at migration sites in greater numbers than other migrating eagles in these areas, the steppe eagle’s overall population has plummeted. Outside of the breeding season, the Steppe Eagle is normally silent, but when showing, it emits crow-like barking. During certain behaviors like as displays, interaction, alarms, and threats, calls are frequently made.

The steppe eagle, as its name implies, enjoys open, dry habitats, which means it prefers deserts, savannas, and grassland steppes. It can be found in altitudes of up to 3000 meters (9,840 feet) above sea level, but it has also been seen above 7900 meters (25,900 feet). An average territory is 30-50 km2 (11-19 mi2) in size, yet it can be as large as 100 km2 in exceptional cases (40 mi2) The steppe eagle builds its nests on the ground, on rocky slopes, in shrubs, and on telegraphic poles since it prefers sparsely forested places. The steppe eagle is a huge, heavy bird with a strong appearance. It has a dark brown body with a longish yet robust neck and a short head with a powerful bill and long gape-line. It has lengthy wings, a longish and rounded tail, and well-feathered (almost untidy looking) legs. The female is larger than the male and has similar plumage coloring. Weight of Male: 2.2-4.6 kg, Weight of Female: 3.5-5.5 kg; Body Length of Male: 65-77 cm, Body Length of Female: 53.6-65.5 cm; Wingspan of Male: 174-199 cm, Wingspan of Female: 192-262 cm. In comparison to many other Aquila eagles, steppe eagles, like tawny eagles, can be relatively friendly and accessible. The adult is a brownish-brown color with darker centers on the larger coverts. Adults have conspicuous pale rufous to dull orange-yellow to yellow-brown patches on the nape and hind head, which are more noticeable in the eastern section of the range. The juvenile’s down plumage is white. The wing coverts are dark brown, and the flight and wing feathers are light brown with ochre edges. The color of the Steppe Eagle evolves from a mild to a light brown tint (1 year) to a reddish to dark fawn (2-5 years) to dark brown (2-5 years) during the course of its life (6 years or older). Color variations at different ages serve as markers for the wide range of transitions that occur during each molting stage. Small animals, particularly gophers, as well as small birds, reptiles, and insects, are the main prey. Fresh carrion, on the other hand, is its most prized pleasure and the basis of its diet. It also has no qualms about stealing food. When it spots a victim flying over its domain, it dives after it and kills on the ground with its formidable talons. Alternatively, it can trap a rodent trying to find shelter in its burrow or steal food from other birds in mid-flight. The steppe eagle can be difficult to identify from other eagles in many situations, especially during migration and winter. The Steppe Eagle is most commonly seen in broad steppes and semi-desert areas throughout most of its breeding range. It has really mastered overland habitats, and thus a wide range of landscapes, unlike other eagles. The Steppe Eagle is adaptable when it comes to choosing a location for its nest. It can make its nest on the ground, in bushes and trees, on cliffs, power line pylons, other man-made structures (including the ruins of houses and other buildings, metal buildings, engineering structures), and on cliffs, power line pylons (up to 30m in height). Steppe Eagles arrive in breeding grounds around March. Both partners frequently arrive at the same time. The availability of prey is critical for this species’ breeding season. They are migratory birds that leave their breeding grounds in late August to migrate to their wintering grounds. There are usually 1-4 eggs in the Steppe Eagle’s clutch. Each succeeding egg is laid every 2–5 days, with the average being 3–4 days (rarely up to 10 days). When the first egg is laid, the incubation period begins. The egg is white with ochre and light-brown dots that vary in color intensity and size. The shell is coarse-grained and thick. The size of the eggs are 62.5 – 80.1 × 48.9 – 60.5 mm, and 73.81 × 55.85 mm on average. Steppe Eagles fly with heavy, leisurely wing beats and have long, broad wings. The wings are held horizontally with a slightly drooping hand when circling. Wings are raised and bent at hand level when soaring. Persecution, changes in or removal of their habitat for agriculture, and collisions with power lines are all threats to the Steppe Eagle. This species is one of the most frequent eagles in the world, and it may be common inadequate habitats.