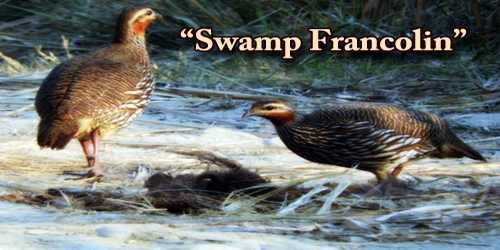 A shy, terrestrial game bird belonging to the grouse, partridge, and pheasant family (Phasiandae) is the swamp francolin (Francolinus gularis), also called swamp partridge. It is a partridge species native to the Himalayan foothills of northern India and Nepal. It is the largest francolin in Asia. This species is well distinguished within the genus because of its unusually long legs. It’s considered extinct within the Ganges-Brahmaputra delta in Bangladesh. It threatened with extinction and is listed as ‘Vulnerable’, mainly as a result of habitat degradation and loss. It’s listed as Vulnerable on the IUCN Red List. The males and females of those francolins look-alike in plumage. But males are around 30 cm in length, and larger than females. The upper plumage is buff-brown. The pieces underneath are brown with white lines. The throat is bright red rust, and the feet are slim red. This species is effortlessly recognized from the majority of our partridges by its huge size and nearly long legs; as in the last species, the genders are similar in plumage, yet the chicken is effectively discernable by his spikes. The upper plumage is earthy colored banned with buff, and the external tail-quills chestnut, as in the dim partridge; yet the throat is splendid rust-red, and the remainder of the under-parts earthy colored longitudinally streaked with white. The bill is blackish, the eyes dim, and the feet dull red. The chicken of this species, which is somewhat bigger than the hen, will gauge fifteen inches, however his tail is just somewhat more than four; the wing is in excess of seven inches, and the shank two-and-a-quarter.

The back and wings of the swamp francolin are covered in black and brown feathers and it has white highlights on the chest, which are not unlike other partridges. On the upper throat and neck, this species also has distinctive rusty-red coloring. While both males and females have identical plumage, its spurs and darker colored legs make the male swamp francolin easily identifiable. These winged creatures possess bogs and edges of wetlands. They feed on seeds, creepy crawlies, oats, grains, bulbs, and tubers. Its environment is tall soggy prairie and bogs in the floodplains of terai and further north and upper east. Because of the annihilation of its environment, the fledgling is getting more uncommon. These winged creatures seem monogamous and breed during February and May. The call of the marsh francolin is regularly an uproarious and cruel chuill sound, however, when froze it takes after a noisy laughing and humming sound.