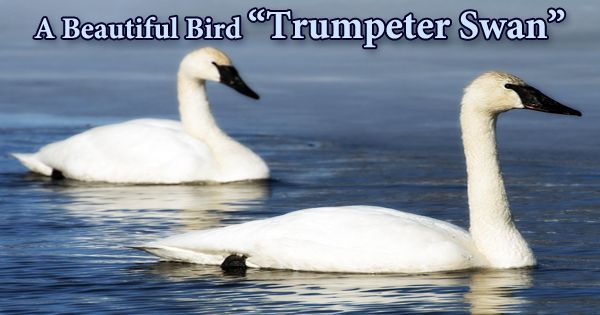 The trumpeter swan (Cygnus buccinator) is a black-billed swan with a low-pitched call that flies fast. It is found in North America. With a wingspan of 185 to 250 cm (6 ft 2 into 8 ft 2 in), it is the heaviest living bird native to North America and the largest extant species of waterfowl. With a slender neck and snowy-white plumage, this once-endangered, now-recovering species is as elegant as any swan. They breed in remote wetlands in Alaska, Canada, and the northwest United States, and spend the winter on ice-free coastal and inland waters. It is the American equivalent and close relative of Eurasia’s whooper swan (Cygnus cygnus), and some authorities have also found them to be the same species. It was once on the brink of extinction (fewer than 100 were counted in the United States in 1935), but it has made a strong comeback; its population in western Canada and the northwestern United States now exceeds 5,000, despite the fact that it is still listed as endangered. The Trumpeter is extremely sensitive to human disturbance; however, in protected areas like parks and refuges, it can become accustomed to humans and allow close proximity. The trumpeter swan is the world’s largest living waterfowl, as well as North America’s heaviest and longest native species. Adults are normally 138–165 cm (4 ft 6 in–5 ft 5 in) tall, but large males can grow to be 180 cm (5 ft 11 in) long. Adult birds weigh between 7 and 13.6 kg (15 and 30 lb). Male average weights have been reported to range from 10.9 to 12.7 kg (24 to 28 lb) and female average weights have been reported to range from 9.4 to 10.3 kg (21 to 23 lb), likely due to seasonal variance in food access and variations due to age.

Trumpeter Swans are the heaviest flying birds in North America, with males weighing in at over 26 pounds. Swans require at least a 100-meter-long “runway” of open water to get that much mass aloft: galloping across the surface, they almost sound like galloping horses as they produce speed for take-off. It is one of the heaviest living birds or animals capable of flight, and the heaviest flying bird in the world in terms of average mass. When Trumpeter Swans are three or four years old, they form pair bonds. The pair spends the whole year together, migrating together in migratory populations. Trumpeters are thought to mate for life, but some do change partners during their lives. Males who had lost their mates did not mate again in some situations. The trumpeter swan has a broad, wedge-shaped black bill with a thin line of salmon-pink coloration around the mouth in some cases. The bill is up to twice the length of a Canada goose’s (Branta canadensis) bill and is the largest of any waterfowl, measuring 10.5–12 cm (4.1–4.7 in). The legs are gray-pink in color, but they can be yellowish-gray or even black in some species. The tarsus is 10.5–12 cm (4.1–4.7 in) in length. Lakes, wetlands, large rivers, and coastal bays are all home to Trumpeter Swans. They used to be more common in freshwater than saltwater, but that no longer holds true. Open water, food, and protection from disturbance are the most critical habitat requirements for them. They forage on land and on water, particularly in the winter. They will forage underwater plants without diving because of their long necks. They are a social, long-lived species. Whooper swans and Bewick’s swans have close calls to Trumpeter swans. They are noisy and musical birds, with a call that resembles that of a trumpet, hence the bird’s name. The bulk of their diet consists of plant matter. Adults eat aquatic plant stems, leaves, and roots in the summer and upland grasses and waste grain in the winter. Sweet potatoes and other cultivated tubers are consumed by Washington birds. Insects and other invertebrates are the primary food of young birds, particularly in the first few weeks after hatching. The female lays 3–12 eggs in a mound of plant material on a small island, a beaver or muskrat lodge, or a floating platform on a clump of emergent vegetation, with 4–6 being the average. The same site may be used for many years, and both partners contribute to the nest’s construction. After hatching, the young are able to swim and feed themselves almost instantly. They are cared for by their parents, who lead them to feeding sites where the children feed themselves. At the age of 3-4 months, the young fly flies. The nest is made up of a wide, open bowl made up of grasses, sedges, and various aquatic plants, with a diameter varying from 1.2 to 3.6 m (3.9 to 11.8 ft), with the latter growing larger after multiple uses. The eggs are about 320 grams (11.3 oz) and measure 73 millimeters (2.9 in) wide by 113.5 millimeters (4.5 in) long. Trumpeter Swans incubate their eggs in an odd way: they cover them with their webbed feet to keep them warm. The oldest known Trumpeter Swan was a female who lived to be at least 26 years, 2 months old when she was found in the wild in Wisconsin by her bank; one captive individual lived to be 32 years old.