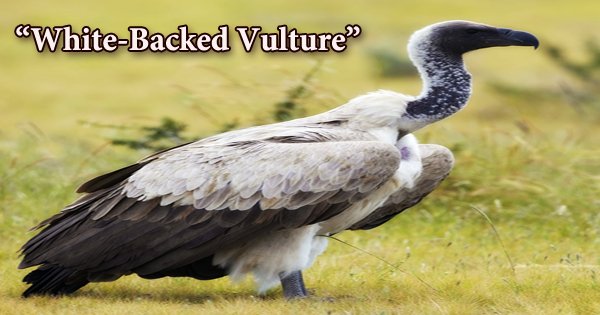 The white-backed vulture (Gyps africanus) is a Sub-Saharan African species ranging from Mauritania to Sudan and Ethiopia, as well as northern and eastern South Africa. It belongs to the Accipitridae family of vultures, which also includes eagles, kites, buzzards, and hawks. These lovely medium-sized vultures can be seen soaring over a wide range of habitats, including towns and villages, as well as practically anywhere where there are substantial concentrations of big game species. G. fulvus, the European griffon vulture, is a near relative. It is also referred to as the African white-backed vulture to distinguish it from the Oriental white-backed vulture, which is now more commonly known as the white-rumped vulture and to which it was once thought to be closely related. It is the most frequent huge vulture in Africa, and it is a skilled scavenger that feeds on enormous animal corpses. Hundreds of vultures congregate to eat enormous dead animals. They feed themselves until they are unable to fly, then rest with their wings extended and their backs to the sun. It has a dark-brown face, a long, white neck, and, of course, a white rear that is visible only while the bird is flying. It has white tops and brown bottoms to its wings, which can span up to 7.5 feet. Because feathers can trap pathogens, the white-backed vulture’s mostly bald head helps it maintain its body temperature during hot days and cool nights, as well as stay clean while eating. White-backed Vultures, on the other hand, enjoy broad savanna and dry woodlands with huge scattered trees to call home. Trees are vital for this species’ survival and safety because they provide a safe roosting (resting or sleeping) and nesting environment. When there are no other options, the White-backed Vulture will take up residence in places with less trees. These vultures can be found in Africa south of the Sahara, including Namibia and South Africa, as well as West Africa’s tropical forests. They can be found in forest environments with large grazing mammals.

White feathers run down the back of the White-backed Vulture, also known as the African White-backed Vulture. It features a dark brown head and a shining black beak, as well as a white ruff around its neck. The adult’s pale back stands out against the dark plumage. The majority of juveniles are dark. This is a medium-sized vulture with a body mass of 4.2–7.2 kilograms (9.3–15.9 lb), a length of 78–98 cm (31–39 in), and a wingspan of 1.96–2.25 m (6–7 ft). This colossal scavenger is critical to the ecosystem’s survival. It only eats carrion or dead animals’ corpses, and by eating meat before it rots, it prevents deadly bacteria and viruses from accumulating on decomposing carcasses. Its stomach acids also kill bacteria, reducing the danger of disease transmission to humans and other animals. Vultures help to control bug populations connected to eye problems by efficiently picking carcasses clean. White-backed vultures are diurnal and highly gregarious birds. Its feeding behaviors are sociable, and big groups of them congregate when food is plentiful. Hundreds of White-backed vultures can congregate near a dead animal. The White-backed Vulture, like most large vultures, travels considerable distances in search of food and spends much of its time soaring overhead. As they scatter from or abandon their parents’ territory, juveniles may roam far and wide. It travels in flocks and lays one egg in trees on the savannahs of the west, eastern, and southern Africa. The majority of the population is local. They are extremely tame birds that will venture into settlements in search of food. They are designed to eat soft tissue and are incapable of tearing apart huge corpses with thick skin. When a vulture discovers a recently slaughtered animal, it will spin in the sky, signaling other vultures to fly down and feast. After a meal, a vulture may bathe with other species at a favored spot, or rest with its wings spread and back to the sun. The white-backed vulture is an extremely social bird, and it’s not uncommon for hundreds of them to congregate for a meal and strip a large carcass clean in under three minutes. When it approaches a cadaver, the vulture makes chittering and squealing noises, similar to a pig. It will frequently enter human communities in pursuit of livestock that has died. They reproduce in the dry season, in loose colonies of 2 to 13 birds. Within their domain, they build their nest at the top of a large tree, frequently near a stream. The nest is a platform built of sticks, with the interior lined with green leaves and grass, and is modest in comparison to the size of this big vulture. Vultures with white backs enjoy an extended breeding season. The incubation stage lasts around 8 weeks, while the nestling stage lasts approximately 4–5 months. The white-backed vulture roosts in groups of 10 to 12 at night. This vulture necessitates large trees when it comes to breeding. Vultures are monogamous and only breed once a year, during the dry season when each female lays one egg. Scientists believe that, like most other vultures, the White-backed Vulture relies on other vultures and scavengers such as jackals, hyenas, and even dogs to get food. This vulture will seek out groups of other vultures or even scavenging animals, as this indicates that there is likely some excellent food nearby. Conversion and loss of habitat for agriculture, less available carrion due to declining wild ungulate populations, being hunted for traditional medicine use, illegal capture for the live trade, drowning in farm reservoirs, electrocution from electricity pylons, persecution, and poisoning are the main threats to the White-backed vulture.