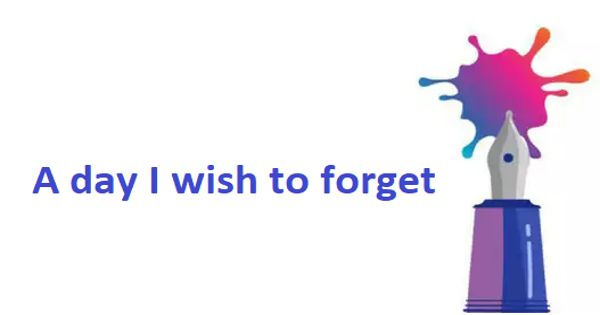 A day I wish to forget – an Open Speech

A day I wish to forget – an Open Speech

A day I wish to forget. That would be the day when everything that could go wrong did go wrong. It was a day that began like any other day. If it had not, I would have stayed in bed and the rest of the day would not have happened.

I reached school at the usual time. The first lesson was in the science laboratory. Mr. Kanan our chemistry teacher marched in and explained the experiment we were to carry out. My partner Ru Ern and I set to work. Halfway, we noticed a couple of mosquitoes flying around us. This was the first time we noticed insects in the lab. One of the mosquitoes landed on my arm. Instinctively, Ru Ern smacked my arm hard to kill it. It made me drop the bottle of ammonia I was holding. The bottle broke and the pungent smell of ammonia spread all around us making us choke. Everyone dashed out of the lab coughing and gagging. The lab assistant had to clean up the mess. Mr. Kanan was quite angry at our carelessness. He gave the entire class demerit points. Ru Ern and I wished the ground would open up and swallow us. But no, we had to suffer the killer looks directed at us the rest of the day.

By recess, I was beginning to forget the unpleasant incident and was just enjoying my food. Then the boy next to me stumbled as he was getting up and spilled his bowl of leftover curry noodles all over me. I picked bits of noodles and beansprouts off my clothes while he apologized over and over. I went to the toilet and tried to wash the curry out of my clothes and my hair. The bright orange stain refused to come off my white shirt and the smell was still quite strong. The only consolation was that I could change into my sports clothes.

With the two disasters keeping me preoccupied, I almost forgot about the inter-house basketball semi-final in the afternoon. We played against Red House which was a strong opponent. We were neck to neck right till the final minute and then the golden opportunity to win was given to my team because of a foul. Everyone watched eagerly as I took the free throw. As the ball flew towards the hoop, I held my breath. The ball hit the metal ring and bounced away. Red House yelled with joy as my team groaned. It could not be happening, I thought. How could I have missed it? But I did. My team members’ disappointment was unbearable to me. That was the final straw.

I slunk home as quickly as I could. I avoided my family members, got cleaned up, and went straight to bed. I wanted to forget that day. I wanted to go to sleep and wake up to a new day, hopefully, a day when everything would go right.