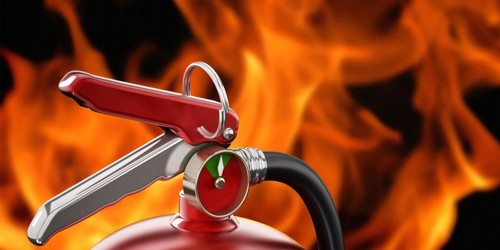 It was twilight time. I was watching television at my house when I heard an explosion. More followed. So I went outside to see what the matter was. A column of dark billowing smoke told me the story. There was a fire raging a short distance away. The noise soon started to get louder and louder and louder until all that could be heard was the deafening noise.

I got onto my bicycle and pedaled in the direction of the smoke. A couple of kilometers later I came upon the fire. It was a row of motor-workshops and they were burning furiously. People from houses along the street ran out in their dressing gowns onto the road and huddled together to witness a roaring fire devastating the house of a family living nearby. The incandescent flames suddenly erupted scattering fragmented glass and debris several yards away. A large number of people had already gathered at the spot. They started throwing dust and pouring water over the fire.

The police and fire department had already cordoned off the area. I watched from a distance. A crowd had already gathered and we gaped with amazement at the spectacle presented by the burning shops. At the area of desolation, smoke continued to billow out of the rubble and a thick deposit of ash and dust had covered the street making it completely unrecognizable. The rushing water from several houses soaked the building, but it did not seem to have any effect on the flames. Thereafter firemen stretched upwards a huge ladder structure and I could see some fireman climbing up with hoses in their hands.

The fire rose to about twenty meters and it lit up the whole area even though the sky was already dark. The firemen desperately sprayed streams of water into the fire to control it. Now and then explosions can be heard as gas cylinders blew up in the intense heat.

For more than an hour, the fire raged. I could see anxious people trying to get near the workshops only to be held back by the police. They were obviously the shop-owners trying to save their shops. Actually, they could do nothing but wait for the fire to be extinguished. The continuous flooding brought the fire under control but the building had by then been completely destroyed.

Finally, the blaze died down and darkness enveloped us. The workshops were totally razed. Only red-hot embers remained where they once stood. The crowd thinned and I too got onto my bicycle and cycled home.