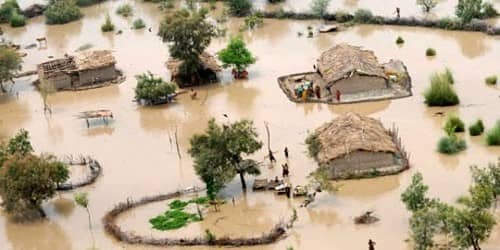 A Flood Scene that you Witnessed

A Flood Scene that you Witnessed

[This is a sample essay or letter type named a Flood Scene that you Witnessed. Suppose you just witnessed a flood scene in a nearby housing estate. For your class assignment, you want to write a description of the flood scene.]

Last few days heavy rains caused a flood. After raining heavily and continuously for two days and nights, (A place or area name) became flooded. The water level rose so high that it reached the windows of the houses. We saw a big sheet of water all around. It was believed to be the worst flood ever to hit this town area. Many houses were surrounded by rushing water and it was a horrible sight.

The roads leading to and out of the housing estate were flooded too. I saw that many other local people were submerged in water. In fact, the whole place looked like a lake. The people were carrying their luggage in the boats. In the morning, when the water level was just starting to rise, children came out from their homes to play in the water. Many residents could not leave their homes to go to work. The Government officers had made arrangements for a big camp.

The condition of the people was very miserable. When the water was too high for safety, the residents had to evacuate to higher ground. This was in the late afternoon. Rescue boats were sent to transport them. As the boats were insufficient to transport all the victims, some men waded in the shallower parts and walked away from the flooded parts. The poorest people were given food first and people like us had food in the last.

Along the main roads, many cars were stalled in the water. Apparently, water had seeped into the engines. Heavy loss of life and property took place and epidemic broke out. In front of house gates and within the house compounds, cars were stuck there too. The owners had to leave their homes without the vehicles. The people were rendered homeless.

The flood victims were put up at a hearing by the school which is on higher ground. The people in the camp were given medical aid. It caused a great loss of human life and property. At times of crisis, the charitable spirit of the community becomes ever more evident. Crops were damaged, the tree was uprooted, houses were washed away, cattle were drowned. People from other areas came to offer the flood victims help. They donated food and other essentials.

The tragic scene of the flood has haunted my mind. Fortunately, the floodwater subsided the next morning. I still shudder at the mere thought of those scenes. I was really shocked by this suffering condition of the people. The affected people were seen returning to their homes. The destructive scene of the flood still floats in my mind.