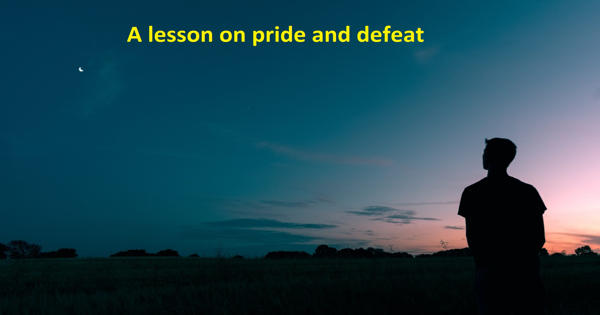 A lesson on pride and defeat – an Open Speech

A lesson on pride and defeat – an Open Speech

I had always prided myself on my sharp tongue and witty retorts whether in-class debates or casual arguments. Thus, when I was selected to represent the school in the national debate series, I was naturally supremely confident of my readiness for the task. Little did I know that this would turn out to be one of the most important lessons in my life.

The run-up to the finals was a breeze for my team. We were all good speakers who had the benefit of an experienced teacher who trained us well. But in the team, I was undoubtedly the most outstanding speaker. In each of the rounds that I debated in, the judges had unanimously selected me as the best speaker. This meant that my confidence was at an all-time high by the time we found ourselves with one week to train before the finals. I had no reason to even think that I would not be voted the overall best speaker for the debate series.

Unfortunately, this meant that I began to get arrogant about the whole business and started putting on airs with my team-mates. I would scoff at what I saw as their pathetic rebuttals and poor debating style. I saw myself as the natural debater who would be let down by their bad performance. As the finals drew near, I became more and more dissatisfied with my team. I began missing practices, much to the panic of my team-mates and the frustration of my teacher. They had no choice but to rely on me to pull through on the day of the finals. Much as they would love to remove me from the team, they could not as there was no replacement good enough.

The day of the finals dawned bright and fine. I practically skipped to the venue of the debate finals, feeling the exhilaration of being able to finally show off my debating prowess. But the reality was not something that I had ever imagined. My absence from the practices had created a rift between my teammates and me. We could not seem to work seamlessly as we did in the previous rounds. Instead, our coordination was so bad that even our school supporters were shamed into silence. When it was my turn to conclude as the last speaker of the team, an expectant hush fell over the hall. Everyone knew that I was touted the one most likely to win the coveted overall best speaker for the series.

As I launched into my speech, I knew that things were very wrong. I was hesitant in my elucidation of the issue, realizing too late that what I was saying sounded incoherent as it did not follow logically from my other team speakers’ points. The puzzled looks on the faces of the judges almost drove me to tears. I had to struggle on with my speech, trying to hold back the hot tears that threatened to overflow I saw immediately the stupidity and arrogant oaf that I had been. I realized too late that I could have been a really good speaker if only I had not been overconfident. As I sat down after speaking my piece, tears broke their banks and scalded my cheeks. I knew that we had lost the title. Never before had I ever felt so alone, or so rightly so.

Suddenly, a reassuring hand clasped mine. I looked up into the kindly face of my team-mate, the one whom I had earlier condemned as a moron to her face. She gestured that it was all right and that I should not feel bad. That made me feel even worse. I felt like a scum that the tears now came unabashed. The other two team-mates of mine came over and hugged me. Together, they hoped to stem my feelings of regret and pain even though I had rightfully deserved everything and more. In fact, I had cost them the title. I kept sobbing the word “sorry” to them, feeling even worse now that they had repaid my irresponsibility and haughtiness with their kind words and comforting gestures. Even my teacher came over to give me a tight squeeze on the shoulder to say that all was forgiven. When we were called to receive the prize for the first runner-up position, we went up together as a team and bravely lifted the trophy to salute the cheers of our supporters. I finally realized what it was like to be a team.

Till today, I will never forget the trauma of defeat fashioned by my own hands or the sheer joy of knowing that I had support in my lowest moment. I went on to the next debate series and eventually clinched the title with the same team in the following year. I had learned that no man is an island by himself.