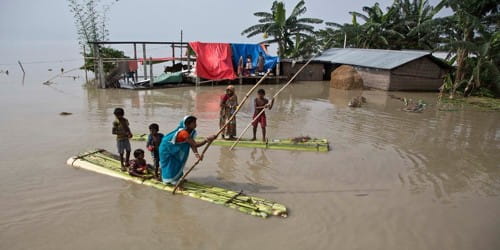 A Massive Flood in your Village

A Massive Flood in your Village

I live near the River in a small village. The massive flood that started on (a date) will be forever etched in my mind. There are more than a hundred fami­lies in our village. Every year during the rainy season our village is surrounded by water. The floods destroyed and caused heavy damage to 700 homes and displaced 90,000 people in my village. With the area having only a population of 25,000, it was a significant number of flood victims. The immediate problems that had to be addressed were water, sanitation and health issues. We have built our houses on the rocky ground. It is much above the level of the surrounding earth.

As many of the district health centers had been destroyed or damaged, water-purification tablets and water tanks were urgently needed. Although these were essential in maintaining the general health of the victims, the grief openly displayed in their faces was more worrisome. Some just did not want to be consoled or even counseled. The people were carrying their luggage in the boats. The loss of loved ones, babies, husbands, and siblings snatched by the fury of the rising waters was too difficult to even consider. As food supplies trickled in, victims stampeded the volunteers. Relief efforts were also hampered due to the lack of communication and greed of some profiteers. To save people from the possible attack of water-borne diseases all precautions were taken.

Floods not only cause damage to the property but are also harmful to life and health. The flood had been traumatic for many children. They felt isolated because of the deep mud left by the floods. Many were not able to leave their homes, play outside or go to school. Their usually cheerful faces were replaced with forlorn faces that had not quite grasped the extent of the devastation. Many others were also traumatized by the water, refusing to leave their homes. When the condition is severe, the schools and offices are shut and it thus disturbs the normal life of people.

Flood is a natural disaster that is caused due to the accumulation of excessive water in a region. I am grateful that I survived the flood without losing any of my family members. We lost our home and belongings, but nothing can replace the life of a loved one. Flood victims began to move back home, to clean up the place as well as to assess the damage. This traumatic experience taught me many things. Among the most important were to cherish my family and to be strong in all adversity.