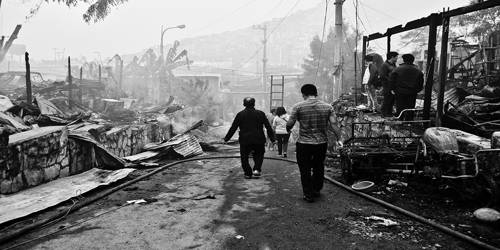 A Natural Disaster that Struck Unexpectedly – an Open Speech

A Natural Disaster that Struck Unexpectedly – an Open Speech

It was December 26th, 2004. People were in a holiday mood for a number of reasons. It was the day after Christmas, a Sunday. In Malaysia, schoolchildren were also enjoying their end-of-year holidays.

On Penang island, the hotels were fully-booked and people thronged the beaches. Besides Malaysians, holiday-makers came from all over the world to the resort hotels in Ferringhi Beach and Tanjung Bunga. The Dillon family had come all the way from Europe to escape from the coldness of winter. They had arrived the night before but were up early to swim in the sea and eat a late breakfast in the Crystal Restaurant on Fisherman’s Pier.

While enjoying their Asian breakfast in a cozy private room facing the water, they saw a strange sight through the glass windows. People were gathering on the beach and pointing at the sea which was receding quickly into the horizon. Some people were excitedly picking up a shell and even fish that had been exposed. Then Mr. Dillon heard the Japanese man at the table next to theirs shouting `Tsunami! Tsunami!’. The Japanese man and his family jumped from their seats, gesticulating wildly to everyone, and dashed for the exit. Although no one understood Japanese, Mr. and Mrs. Dillon sensed that their lives were in danger.

All of a sudden a gigantic wall of water came crashing through the restaurant windows, knocking over every person and object. Mr. Dillon and his wife grabbed their two children’s hands. However, Tom Dillon’s little hand slipped from his mother’s grip and he was tossed by the waves. By some miracle, somebody saw his head bobbing above the water and snatched him up in time. Just as forcefully, the waves pulled back, tugging along whatever it could. Fortunately, the Dillons and everyone else in the restaurant had escaped onto drier ground. They dashed out to the street, shaken and bruised by the onslaught of the tsunami. The children, overcome by shock at first, burst into tears. Everyone literally trembled with fear.

The survivors tried to go as far inland as they could. They had to trudge in thick mud all the way. Seeking refuge in a hill-top hotel, some even tried to check in there instead of returning to their beachfront accommodations.

The devastating tsunami of 26th December 2004 killed more than 60 people in Malaysia. Its seismic force was most destructive in Aceh in northern Sumatra, the western part of Thailand, parts of Sri Lanka, and India. There were also casualties in Somalia, the Maldives, and Myanmar. Altogether, about a quarter of a million people were killed, thousands went missing, and more than half a million lost their homes. Never has a natural disaster traumatized so many nations.