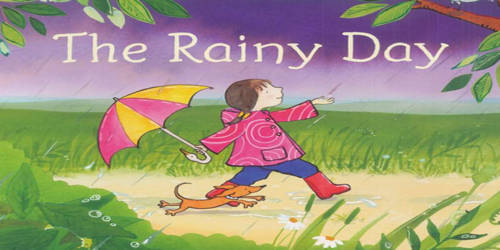 A Rainy Day – an Open Speech

A Rainy Day – an Open Speech

A day is called a rainy day when it rains almost all day long. I woke up at the usual time for school that Tuesday morning. When I looked out the window, the day looked cheerful and the sky was bright and sunny. I grabbed my towel and headed for the bathroom. The sky is overcast with black clouds on a rainy day and the sun is not seen for days together. When I emerged from the bathroom some twenty minutes later, I saw that the day had transformed and dark clouds looked ominously up in the sky.

Mother advised me to bring an umbrella, but I declined to say that the school was only a short walking distance away and that I would be in class before it began to rain. I ate the two slices of buttered toast Mother had made for me and drank a glass of chocolate milk. Then, I gathered my school bag and walked briskly in the direction of my school. Just as I reached the school gates, hard drops of rainfall pelted my head and body. I dashed inside the school building just in time to escape the downpour that had begun. There is water everywhere. The roads become muddy and slippery.

In class, we had to shut all the windows and switch on the lights for the day had grown very dark. There was also a constant strong wind that threw the raindrops onto the closed windows causing a continual pattern.

The passers-by pass the muddy road with the risk of foot slip on a rainy day. I thought that the rain would cease by the time the school dismissed. I was wrong. The rain was still pouring relentlessly when it was time to go home and it looked as if it would carry on throughout the day and night. I decided to walk in the rain.

When I reached home. I was soaked to the bone. Mother made me take off my wet clothes and take a warm shower. Then, we ate a nice hot dish of fish and prawns for lunch.

The rain had somewhat subsided to a slight drizzle by the time Father returned home. We had dinner together and then I did some homework given to me at school. Nature fails to assume a smiling appearance or to express itself in a glimpse of pleasure.

I went to bed early that night. It rains hard and the wind hisses. The fury of nature goes on for hours. The rain had brought down the temperature by a few degrees Celsius and I was grateful for the cool and cozy atmosphere after so many warm and sweaty nights.