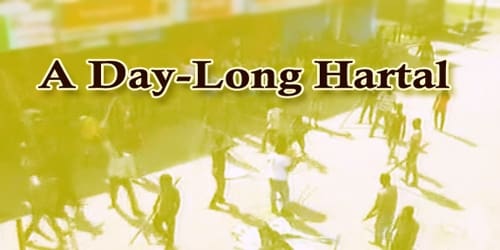 A Report On A Day-Long Hartal

The countrywide daylong hartal ended with a lot of violence and bloodshed. At least 3 people were killed and many were injured in violence across the country. Law enforcing agents were very alert in the capital. Yet some violence also occurred here leaving one man dead. Crude bombs were blasted in several places of the city, including in front of the (Political party name)….. central office at (Location/Area name)…… area miscreants torched a CNG run three-wheeler, and 5 people were badly burnt. They were taken to Dhaka Medical College Hospital, but one was declared dead. Police caught two suspects from this incidence. They recovered 10 cocktails and other explosives from a picketing group. They also caught thirty-five picketers from some parts of the city. Hartal was observed in all the districts, but terrible incidents occurred in (District’s name)…….. and some other parts of the country. In (District name)….., (Name) Mr./Mrs. ……. of (Name of the village)…. village in ……(Location) died on the way to Dhaka early yesterday. Local people said, he/she joined a procession at (Area name)….. in support of the hartal. He/she was injured badly when the procession came under attack from an anti-hartal procession group. He/she was taken to Local Hospital but died there.

In other districts, some picketers removed fishplates from the railway track at (Area name)….. of (Area name)…… around 6:00 am, disrupting rail communications on the Dhaka-Chittagong route for three hours. A clash between the (Political party’s name)….. and the supporters of the (Political party’s name)…… took place in other districts and 20 were injured.