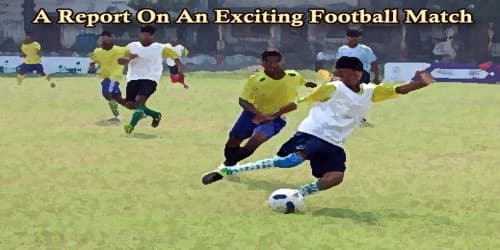 A Report On An Exciting Football Match At ‘XYZ’ Stadium

The match was started just at 3.00 p.m. Before that the referee and the players entered the field in time. The spectators from all sides of the field cheered the players. At the very beginning, the match was almost lifeless. But within a few seconds, and excitement spread out among the spectators. There were attacks and counter attacks every moment. Both the team made several movements and scoring chances. But the first half came to a close with no goal. At the beginning of the second half, both the team grew furious. They attacked each other and tried to net the ball. There was wild excitement on both sides. But, perhaps, it was the day of Team-2 (Institution name). Because they had the chance of the day to score a goal. It was only 5 minutes left of the match. The left finger of Team-2 (Institution name) got a chance from a sharp pass from the midfield and was able to score a goal.