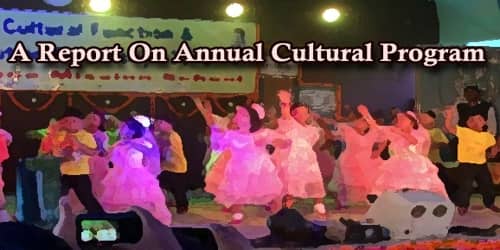 The annual cultural program of ……. School/College was held gorgeously in the school/college premises yesterday. (Name)Mr./Mrs. ……., Principal of the college, presided over the function. The local MP was present as the chief guest and the District Commissioner of …..(District name) was present as a special guest. Other distinguished guests and guardians were also invited to the function.

The program started with the recitation from the Holy Quran. Then there was the national anthem. After that, the cultural events started. It was a day-long program. There were music, recitation, dancing, story-telling, extempore speech, chorus and staging dramas. There were hard competitions among the participants. Some events were held in groups. In a debate competition, the girls became champions. In music, the Nazrul group defeated the Madhusudan group. In the drama presentation, the Surjakishore group defeated the Hamid Group.

All the events were so exciting that the audience enjoyed them very much. At the end of the program, there was the prize-giving session. But before it, the chief guest and the special guest were given some time to say something. The chief guest in his speech put stress on the necessity of extracurricular activities of the students. He thanked the college authority, the teachers and the students for organizing such a wonderful cultural program. “The practice of cultural activities will surely perfect the academic career of the students,” he remarked.

The special guest also gave a short speech appreciating the wonderful performance of the students. The program ended with the thanks-giving speech of the Principal.