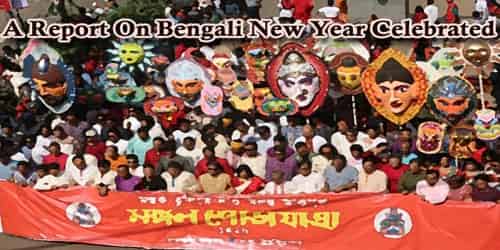 Pahela Baishakh, the first day of Bangla Year of 1426 was celebrated across the country with traditional festivities. In the capital city of Dhaka, the celebration was much more colorful and befitting than in other cities.

The day was a public holiday. Different socio-cultural organizations chalked out elaborate programs to celebrate the day. Chayanat, a leading cultural organization of the country, started the day’s first program at dawn at Ramna Batamul. A large number of people joined the program wearing traditional dresses. Females dressed with their white sharees with red borders and red blouses added a special flavor to the program.

Panta Elish was the greatest attraction of Pahela Baishakh held in Dhaka. A number of temporary shops sat in the Ramna Park and sold Panta Elish. People of different ages and from various walks of life enjoyed the traditional culture.

At the ‘Shishu Park’ premises, another cultural program was organized by ‘Wrishiz Shilpi Gosthit’. The students of the University of Dhaka took out a colorful procession from the Institute of Fine Arts premises. Besides, TSC of DU, Bangla Academy, Shilpakala Academy, Bulbul Lalitkala Academy, National Museum, Liberation War Museum, and Jatiya Press Club organized different programs to celebrate the day. Govt. owned Bangladesh Television, Bangladesh Betar and along with all other satellite channels telecast special programs and national dailies published special supplements.

On the other hand, almost on all the streets of the city, there were isolated fairs that looked like village fairs. Thousands of people were seen buying different traditional items though traditional haggling was rampant.