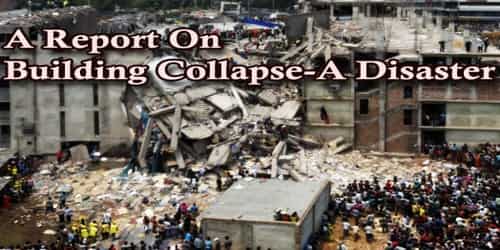 A Report On Building Collapse-A Disaster

Rana Plaza, an eight-story building at Savar collapsed on 24th April 2013. The search for the dead ended on 13th May with the death toll of 1129. Approximately 2,515 injured people were rescued from the building alive. This disaster is considered to be the deadliest garment factory accident in history. It is also the deadliest incident of building collapse that took hundreds of lives.

The building contained clothing factories, a bank, apartments, and several other shops. It gave a signal before its collapse. Some cracks were noticed in some places in the building. Experts examined the cracks and found the building very vulnerable. They gave a warning not to use the building. The shops and the bank on the lower floors immediately closed after this warning. But the owner of the building did not close his garment factories. Rather he forced the workers to work on the day the disaster occurred.

The building collapsed at 9.00 am when the workers were in their work. Although the rescue effort started almost instantly, it was difficult to do anything. The fire brigade teams, police and army jointly tried to rescue the survivors. There were students and local people who also worked as volunteers. But there was no way to go inside and rescue the survivors. However, the rescuers were removing the very slowly and carefully to find life. It was possible for them to rescue more than two thousand workers alive. The rescue effort continued for more than two weeks. Hundreds of dead bodies were found and many of them were identified.

After the disaster, a Trust fund named ‘Rana Plaza Trust Fund’ had been formed to give compensation to the victims. This Trust Fund distributed the money among the victims. Each of the 430 victims received Tk. 50,000/-. However, we know that financial compensation cannot give back the lives that were lost. We hope that industrialists should take a lesson from this incident. They should take precautionary measures to ensure the proper safety of the garment workers so that no such disaster occurs in the future.