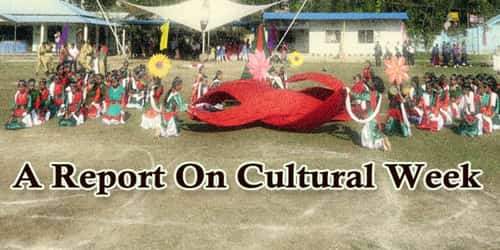 The cultural week was held on (Date:…/…/…) at (Name of institution)……School/College with much grandeur last week. The formal ceremony continued for five days. The Principal of the school/college inaugurated the ceremony at 09:30 a.m. while all the teachers and students of the school/college were present. The whole campus was decorated with festoons and placards on that day. A committee was formed headed by the Principal to celebrate the program.

The cultural program included songs, music, debate, recitation, sports, procession, tree plantation, etc. The first day was on songs and music. At least 50 students took part in the competitions. There were categories of songs such as folk songs, modern songs, band songs, etc. The second day was in drama competition. At least five groups showed their performances. The third day was on the debate, recitation, and sports. The students of all the classes took part in these competitions spontaneously. On this day a cricket/football match was held in the school/college field. The match was highly exciting.

A seminar on “Future of English in Bangladesh” was held at the first session of the final day. In the function, the celebrated educationist (Name) read out a paper. The students of all years and classes attended the program. Distinguished guests and guardians also attended the seminar.

In the second session, the prize-giving ceremony was held. The Deputy Commissioner of (District name)…., (Name) was present as the chief guest. He/she delivered a short speech putting emphasis on cultural activities in the realm of education. Then he/she gave away the prizes among the winners.

Finally, the Principal declared the end of the week with the vote of thanks. This cultural week was really an enjoyable celebration, and it animated everyone in the school/college.