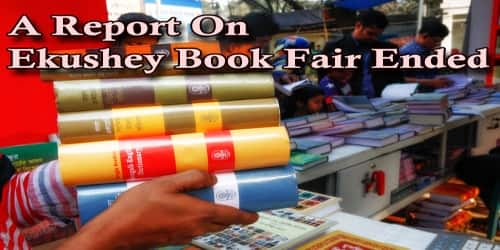 The month-long Bangla Academy Ekushey Book Fair ended yesterday with a huge gathering of book lovers. According to the Book Fair Information center, this year the selling of books was more than 20 million taka that surpassed the record of the last year.

The Ekushey Book Fair is the greatest of all fairs in our country. The book lovers remain to wait for this great fair. The Bangla Academy arranged the fair every year at its premises. This year the authority of the academy has taken a member of precautionary steps to make the fair successful. Traditionally, the Prime Minister inaugurated the fair on the first day of February. At her inauguration speech, she urged people to present in the fair to buy and read books more and to build up a society based on knowledge and justice.

A total of 246 book-stalls of different publishers joined the fair. Besides, there were some stalls that sold snacks and soft drinks. The stall in which the books published by the Academy itself are sold at a reasonable price. Various types of reference books especially dictionaries on various languages and research books are a year-long attraction to book lovers. There is a separate shelf for the children. Among the books displayed and sold in the stalls, there were novels, essays, critiques, comics, juvenile literature and so on. A total of 593 new books were published on the occasion of the fair.

Throughout the month there was a crowd of book lovers in the fair compound. This year, a lot of young children and teenagers visited the fair. Prominent writers of the country also paid their visit to the fair frequently. Whenever such a personality appeared at the fair, the autograph hunters gathered around to collect autographs. There was also an arrangement of a month-long cultural function and discussion at one side of the fairground where prominent artists performed. Police and RAB personnel maintained the law and order situation and hence no hazards were reported.