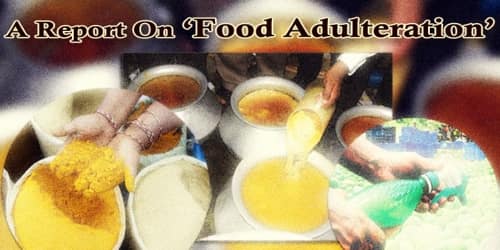 A Report On Food Adulteration

In Bangladesh, over 50 percent of the daily consumed foods including fish, milk and baby foods are found adulterated and poisonous and the adulteration is increasing for the last couple of years. This was disclosed in a report prepared by the National Food Safety Laboratory (NFSL) under the Institute of Public Health (IPH) in Bangladesh. “Around 40 to 54 percent of our daily consumed foods including fish, meat, milk, fruits, vegetables, rice. pulses, oil, salt and baby foods examined by the national food safety laboratory were found adulterated and poisonous”, said NFSL chief analyst and deputy director of the IPH, Dr. …..(Name) quoting the report.

The NFSL prepared this report after conducting adulteration tests between 1995 and 2014 on different food commodities regularly found in the market and it is increasing for the last couple of years, said he. The chief analyst said that the laboratory report also found adulteration at all kinds of milk powder, spices like turmeric, pepper, mustard, etc. and edible oil and palm oil. Even a hundred percent adulteration was also found at different kinds of sweetmeats in the market and most of the liquid drinks such as juice, jelly, jam, pudding, and ice-cream, etc. were substandard, said Dr. …(Name).

This adulteration of food causes serious health hazards. By eating adulterated food people fall a victim to serious diseases including cancer, liver and renal failure, etc. We know that mobile courts and BSTI sometimes catch some dishonest businessmen, but little is done against them.

So, adulteration of food is rampant. In this context, we urge the Govt. to take necessary steps so that food adulteration is stopped immediately, and people can get good and unadulterated food everywhere.