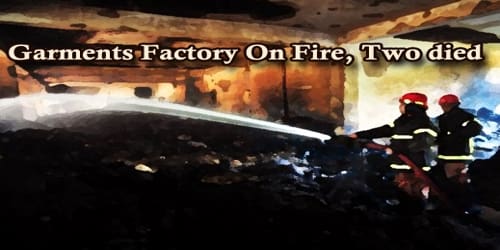 A Report On Garments Factory On Fire, Two died

A devastating fire gutted (garments name) ___Garments, a large readymade garments factory at Savar at about 6 a.m. on last Friday. The fire was supposed to be caused by the sudden outbreak of fire from an electric short circuit. Lack of sufficient fire extinguishers and the presence of burnable like fabric and chemicals worsened the fire. According to factory sources, readymade garments of about 1.5 crore taka, 450 sewing machines and almost all the burnable inside the factory were burnt to ashes. As the fire broke out early in the morning, factory workers and other officials were not present there. However, 12 security personnel’s received serious burn injury and two among them succumbed to death.

Fire Brigade appeared at the spot at about 7:30 a.m. But it was too late. Fire engulfed the six storied factories completely and took too terrible a turn to save the valuables. Yet the firefighters tried their best and managed to extinguish the fire by 10 a.m. A case has been filed at Savar Police Station in this connection and a three-member committee has been formed for a thorough investigation. The committee is supposed to submit its investigation report within 48 hours.