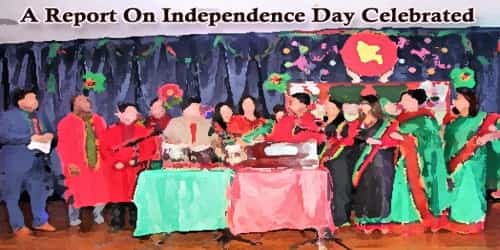 A Report On Independence Day Celebrated At (Name Of School/College)

The 44th Independence Day was celebrated with due respect at (name of institution)…….school/college. (Name……) The principal of the School/College chaired the program. Chairman, Secondary and Higher Secondary Education Board, (District name), was present as the chief guest. The day’s program started with the hoisting of the national flag. Immediately after this, the march past of the students was held and the chief guest took the salute. Then with due solemnity, the national anthem was sung. A discussion meeting was held at the college premises which were nicely fenced with seating arrangements. In the inaugural speech, the Principal paid tribute to the martyrs who sacrificed their lives for the cause of freedom. Then the chief guest stood and delivered his valuable speech. He focused on the contribution and sacrifice of the freedom fighters. He reminded how the Pakistani forces and their local collaborators-Rajakar, Al-Badr and Al-Shams killed innocent Bangladeshi people and violated women. “It is considered to be one of the world’s worst acts of genocide and crimes against humanity”, remarked he.

In the end, there was a cultural program. The students of the college sang patriotic songs and recited poems on the liberation war. They also performed Munir Chowdhury’s Kabar.

The program ended with the Principal’s thanks-giving speech.