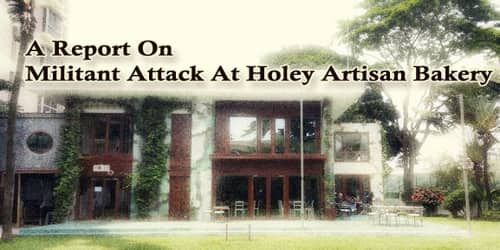 A Report On Militant Attack At Holey Artisan Bakery

A militant attack in Bangladesh is not new, but the recent attack at the Holey Artisan Bakery at Dhaka’s Gulshan area has exceeded all the past records. In this attack, five armed militants killed 18 foreigners, 2 police officers, 2 locals, and 2 bakery staff. When the bakery was cordoned by armed forces the militants did not surrender. Their dead bodies were found after the armed forces started their operation. They might have committed suicide or they could be killed by the attacks of the armed forces. Interestingly when the militants led their attacks, the IS (Islamic State), announced that the five youths are their members. They published their photos on the web. The attack was much significant in the History of militancy in Bangladesh.

Earlier it was thought that youths from religious backgrounds usually turn militants. But this notion proved false. All the five youths who led the militant attack were from an English-medium education background and were from a well-off family. They were Bangladeshi born IS militants. The way the militants killed the hostages were also very significant. Their first target was to kill foreigners who are not Muslims. They slaughtered them brutally. Among them were 9 Italians, 7 Japanese, 1 American and 1 Indian. The death of the Bangladeshi Muslim boy Faaraz Ayaaz was very remarkable. Faaraz was not the target of the militants. They told him to leave the restaurant. But Faaraz did not leave his, two foreign friends. The militants being angry also killed him. After the Holy Artisan attack, the Govt. has become more alert. Special teams of RABs have been working to control the militants.